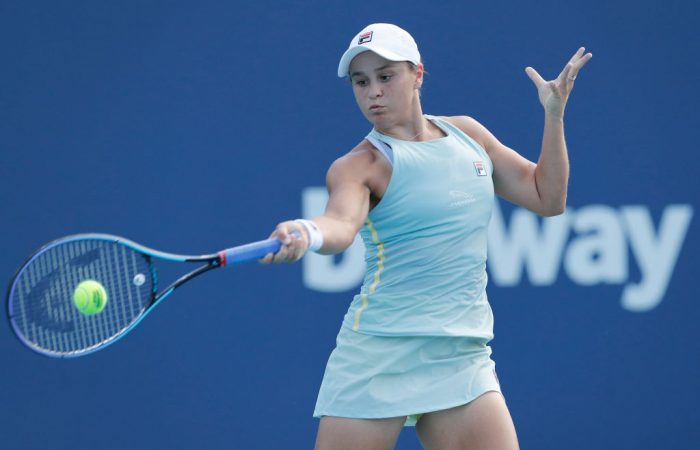 Ash Barty is through to the final eight in Charleston after a tough test from Shelby Rogers.

The world No.1 defeated the American 7-6(3) 4-6 6-4 to set up a quarterfinal meeting with Spaniard Paula Badosa.

It marked an eighth straight match win on American soil but was by no means a straightforward progression for the Australian, who required more than two hours to secure her victory.

After dropping serve in the opening game, Barty levelled several games later and edged ahead in the first-set tiebreak.

But the determined Rogers kept fighting in the second set, twice recovering after Barty claimed service breaks. Claiming her fourth service break of the match in the 10th game, the world No.52 sent the contest to a decider.

While Barty broke early in the third set and consolidated to take a 3-1 lead, Rogers again fought back to level at 4-4.

A fifth service break provided the top seed with another crucial advantage, Barty finally securing victory with her 10th ace after two hours and 22 minutes.

The No.1 seed moves on with an ace 💥@ashbarty secures the last spot in the quarterfinals defeating Rogers, 7-6(3), 4-6, 6-4.#VolvoCarOpen pic.twitter.com/iAoZjtkZSe

“Shelby’s an incredible girl. I’ve got a lot of respect for her. She’s always got a smile in the locker-room and always got a smile on the court – that’s what I love about her,” said Barty, who claimed a fourth win over Rogers, and a third of the 2021 season.

“She’s a great person, a great tennis player and whenever we get to play each other its always a well-fought battle and that was no different tonight.”

While Barty’s 39 winners were far higher than 25 from Rogers, the Queenslander’s  53 unforced errors were costly.

“The conditions are difficult. It’s pretty quick and Shelby was able to control the centre of the court for a lot of that match,” Barty conceded.

“It was about trying to get control when I could but she’s an exceptional player. It’s always a fight no matter what surface, where we are in the world and it’s always one that I enjoy.”

Barty is aiming to become the third Australian woman to reach the final in Charleston, joining Kerry Melville Reid and Sam Stosur – who won the 2010 title.

And John Millman was unable to maintain winning momentum at the Sardegna Open in Cagliari, Serbia’s Laslo Djere claiming a straight-sets victory.