Winning run over for Kyrgios, Kokkinakis in Australian Open doubles 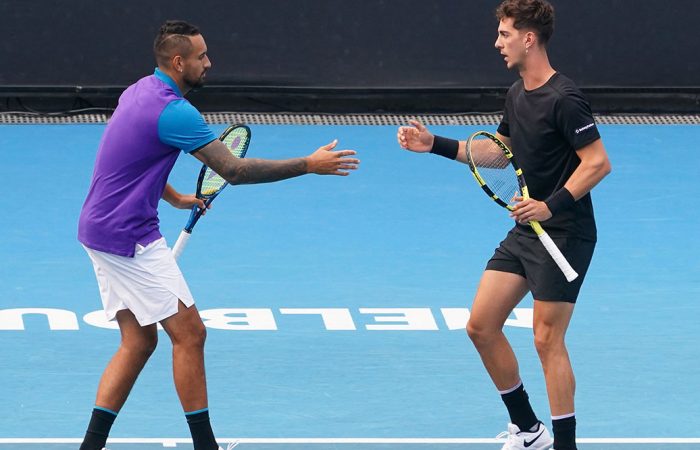 World No.7 Koolhof, a 31-year-old from the Netherlands, and world No.9 Kubot, a 38-year-old from Poland and the Australian Open 2014 doubles champion, showed their doubles nous to record a 6-3 6-4 victory against the Aussie wildcards at Margaret Court Arena today.

“We just wanted to have some fun out there and I think we did that. The guys were just too good, so hats off to them,” Kokkinakis said.

Koolhof and Kubot progress to the third round where they’ll face another all-Australian team of Matthew Ebden and John-Patrick Smith.

Ebden and Smith, along with John Peers and New Zealand’s Michael Venus, are the last remaining Aussie hopes in the men’s doubles draw.

There were some better results for Australian players in mixed doubles action.

“We just had fun and enjoyed ourselves,” Stosur said after winning in 50 minutes.

Australian duo Max Purcell and Arina Rodionova are also through to the second round, combining brilliantly to defeat Venus and Chile’s Alexa Guarachi.

Peers and Belinda Woolcock almost joined them – but were unable to convert the five match point opportunities they had in their first-round match against Brit Neal Skupski and Slovenian Andreja Klepac.