Nick Kyrgios, who faces world No.3 Dominic Thiem in the third round, headlines the Aussies in action on day five of Australian Open 2021. 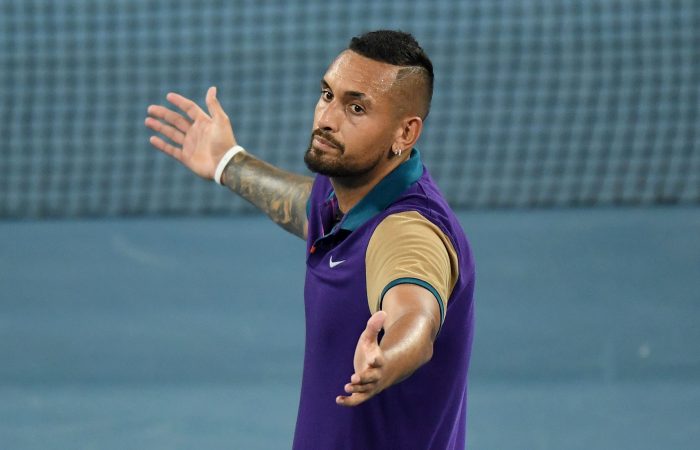 Nick Kyrgios is back in action at the Australian Open tonight, playing world No.3 and last year’s finalist Dominic Thiem in a must-see third-round clash.

The 25-year-old Australian loves the big stage, as he proved in a sensational second-round singles victory at John Cain Arena on Wednesday night. The world No.47 saved two match points before staging a courageous comeback to eliminate No.29 seed Ugo Humbert.

“I know that many people don’t think that I have a heart or, you know, compete as hard as they want me to compete from time to time. But I have been through a lot, and I didn’t just put my hand in a lucky dip and appear here,” Kyrgios said after his remarkable win.

“I put in a lot of hard work when I was young. I’ve gone through a lot and nothing’s really been handed to me. I’ve won all the matches on my own.”

No one could question Kyrgios’ heart in his last match. His performance ignited a rapturous crowd, creating an euphoric atmosphere that has not been seen in world tennis since the global COVID-19 pandemic began.

Well, that was nothing short of EPIC 😳@NickKyrgios is through to the 3R of the @AustralianOpen after a five set marathon with Humbert 🔥#GoAussies | #AO2021 pic.twitter.com/ljSMEiPCI3

However, Kyrgios is not expecting the local crowd support to be an advantage tonight against the reigning US Open champion.

“He’s one of the best players in the world, so he’s for sure going to be able to rise to that occasion. He’s not going to be scared about it. He’s excited. That’s what makes him so good,” Kyrgios said.

“He’s one of the players that loves to thrive in big-match situations. I know that. I know that he’s capable. You’re not going to make Grand Slam finals and win Slams if you’re going to be scared of a little bit of an Aussie crowd.”

Still, Kyrgios rates his chances of scoring his first top-five win at a Grand Slam since he defeated world No.1 Rafael Nadal at Wimbledon as a teenager in 2014.

What exactly should we expect? Kyrgios, who has lost his past seven matches against top-10 opponents at Grand Slam tournaments, does not even know.

“I always, somehow, keep surprising myself,” he acknowledged.

Nick Kyrgios (AUS) v [3] Dominic Thiem (AUT)
Men’s singles, third round, John Cain Arena, fourth match (not before 7pm AEDT)
After saving match points in the second round to keep his Australian Open dreams alive, Kyrgios now faces last year’s finalist. “He’s probably one of the most physical guys on tour. He’s an extremely good player,” notes Kyrgios of the 27-year-old Austrian. “He trains like an absolute animal. He’s consistent every day and I actually have a lot of respect for him. I think his style of tennis is not easy to play.” The world No.47 is aiming to reach the Australian Open fourth round for a fourth time in his career. “I’m going to go out there, serve, play with instinct,” Kyrgios says of his focus.
Head-to-head record: Thiem leads 1-0
Last meeting: Thiem won 4-3 ret. (Nice, 2015)

[15] Max Purcell (AUS)/Luke Saville (AUS) v [WC] Matthew Ebden (AUS)/John-Patrick Smith (AUS)
Men’s doubles, second round, Court 3, first match (11am AEDT start)
Seeded at a Grand Slam for a first time, Aussie duo and last year’s finalists Purcell and Saville are off to a flying start. A showdown with Aussie wildcards Ebden and Smith, who have both previously advanced to Australian Open mixed doubles finals, is their next challenge.

[WC] Lizette Cabrera (AUS)/Maddison Inglis (AUS) v [7] Shuko Aoyama (JPN)/Ena Shibahara (JPN)
Women’s doubles, second round, Court 8, first match (11am AEDT start)
After hard-fought opening-round win, Aussie wildcards Cabrera and Inglis face a Japanese duo in red-hot form. The No.7 seeds are on an eight-match winning streak and have won two titles already this season. The Aussies, both 23, are aiming to advance to a Grand Slam third round for a first time.

[WC] James Duckworth (AUS)/Marc Polmans (AUS) v Ricardas Berankis (LTE)/Mikhail Kukushkin (KAZ)
Men’s doubles, second round, Court 13, first match (11am AEDT start)
After reaching the quarterfinals at last year’s Australian Open, 29-year-old Duckworth and 23-year-old Polmans are enjoying a promising start to their 2021 campaign. Their opponents today proved they are a tough duo, eliminating the No.11 seeds in their opening round.

[10] John Peers (AUS)/Michael Venus (NZL) v [WC] Ji-Sung Nam (KOR)/Min-Kyu Song (KOR)
Men’s doubles, second round, Court 3, second match
Peers and Venus have lost in the second round in their past two Grand Slam appearances and are determined not to continue that trend. The No.10 seeds, who won three ATP titles together last season, face Korean wildcards who are aiming to reach the third round of a major for a first time.

[WC] Olivia Gadecki (AUS)/Belinda Woolcock (AUS) v Leylah Fernandez (CAN)/Heather Watson (GBR)
Women’s doubles, second round, 1573 Arena, second match
It has been a breakout summer so far for 18-year-old Gadecki and 26-year-old Woolcock. They won their first WTA match last week and are now into a Grand Slam second round for the first time. Today’s opponents upset 2019 champions and No.10 seeds Sam Stosur and Zhang Shuai in their opening round.

[WC] Marc Polmans (AUS)/Storm Sanders (AUS) v [5] Wesley Koolhof (NED)/Demi Schuurs (NED)
Mixed doubles, first round, Court 13, third match
Making their third appearance together in an Australian Open mixed doubles draw, 23-year-old Polmans and 26-year-old Sanders are hoping to better a quarterfinal run in 2018. Koolhof is ranked No.7 in doubles and his countrywoman Schuurs is the world No.12.