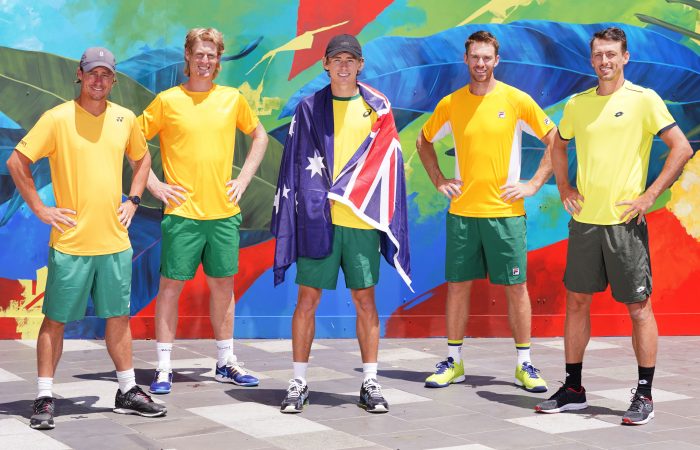 Team Australia faces a big test tonight in ATP Cup action – but according to top-ranked Aussie man Alex de Minaur, the team can’t wait to get out on court.

“We’re all going to be rearing to go, ready to put on the green and gold, and represent our country,” De Minaur declared ahead of Team Australia’s round-robin meeting against Spain at Rod Laver Arena this evening.

The 21-year-old De Minaur has proved he can produce his best in team competitions, pushing then world No.1 Rafael Nadal to three sets in a high-quality showdown during last year’s ATP Cup semifinals.

“He’s young, he’s improving every year. He has lot of things amazing,” World No.2 Nadal said of his Australian opponent.

“I think it is going to be a tough battle for all of us playing against a great team like Australia.”

Match 1: John Millman (AUS) v Roberto Bautista Agut (ESP)
Australia’s No.2-ranked man John Millman is thrilled to be competing at the ATP Cup. “Any chance to play for your country, I love it,” he said earlier this week. “Love donning the green and gold. I’m all for team competitions.” The world No.38 has a difficult opening assignment, facing world No.13 Roberto Bautista Agut. The 32-year-old Spaniard has won all of their previous matches, including a five-set opening round win at Australian Open 2019.
Head-to-head record: Bautista Agut leads 5-0
Last meeting: Bautista Agut won 3-6 6-1 6-1, Monte Carlo, 2019

Match 2: Alex de Minaur (AUS) v Rafael Nadal (ESP)
Alex de Minaur is excited to be competing in Melbourne again, having missed last year’s Australian Open with an abdominal injury. Not even a showdown with 20-time Grand Slam champion Rafael Nadal, who defeated him in straight sets at Rod Laver Arena in the third round at AO 2019, can quell his enthusiasm. “I’m really looking forward to going out there and stepping out on court and competing in Australia,” De Minaur said. “It’s been a long time coming so I’m very pumped, that’s for sure.”
Head-to-head record: Nadal leads 3-0
Last meeting: Nadal won 4-6 7-5 6-1, ATP Cup, 2020

Match 3: John Peers/Luke Saville (AUS) v Marcel Granollers/Pablo Carreno Busta (ESP)
Luke Saville is set to make his ATP Cup debut, partnering the experienced John Peers. “This is a massive highlight for me,” Saville said. “I’ve been working very hard for this moment to represent Australia.” Peers is equally excited and anticipating strong crowd support. “It’s going to be an exciting time. We get to play in front of crowds again, get a bit of atmosphere going,” he said. They face a Spanish duo led by world No.11 doubles star Marcel Granollers.