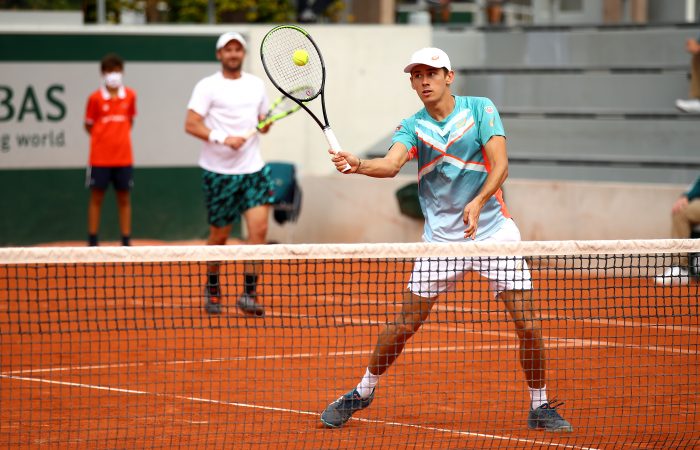 When Alex de Minaur scored his first Roland Garros doubles win this week, he was most excited about sharing the experience with fellow Aussie Matt Reid.

Although there is a nine-year age gap, the duo share a close bond.

“I’ve known him for a very long time and he’s helped me out a lot, so I’m happy that we can get this win together,” De Minaur said.

It was also the 30-year-old Reid’s first win at Roland Garros, a breakthrough that is even more special considering the challenges and uncertainty faced in 2020.

When the global COVID-19 pandemic shutdown professional tennis, Reid needed to find a new way to earn an income. The world No.105-ranked doubles player started tennis coaching in Sydney, as well as working as a fork-lift driver at a stone quarry.

Reid, who achieved a career-high doubles ranking of No.60 in 2017, was unsure when – or if – he would return to the tour.

When the opportunity to partner De Minaur at Roland Garros arose, Reid jumped at it.

This is Reid’s first tour-level tournament since March and the second Roland Garros appearance of his career.

Although the 21-year-old De Minaur won an ATP doubles title with Spaniard Pablo Carreno Busta last month, he was excited he could help Reid return to the tour.

“I wanted to play with an Aussie,” explained De Minaur. “I’m very comfortable playing with (Reid). We’ve trained together, we’ve done preseasons together and shared a room many times. I’m really happy I can play with him.”

This marks their third Grand Slam tournament together, having also made the Wimbledon and US Open second rounds last year.

Can this story of Aussie mateship continue in Paris? We’ll find out on day six at Roland Garros as De Minaur and Reid try to progress to the third round of a Grand Slam doubles tournament for a first time.

[11] John Peers (AUS)/Michael Venus (NZL) v Frederik Nielsen (DEN)/Tim Puetz (GER)
Men’s doubles, second round, Court 7, first match (7pm AEST start)
Peers and Venus enter this match with high confidence, having won eight of their past nine matches. Their new partnership this season has netted two titles, most recently on Hamburg clay last week. They also know their opponents well, defeating the pairing of 37-year-old Nielsen and 32-year-old Puetz in the Australian Open first round in January. The 32-year-old Peers is looking to advance to the third round at Roland Garros for a fifth time.

Ajla Tomljanovic (AUS)/Alison Riske (USA) v [6] Kveta Peschke (CZE)/Demi Schuurs (NED)
Women’s doubles, second round, Court 10, first match (7pm AEST start)
The 27-year-old Tomljanovic has matched her career-best doubles result in Paris – and now has her sights on the third round. But first, the Australian and her 30-year-old American partner need to defeat the No.6 seeds. The 45-year-old Peschke is a former world No.1 making her 21st Roland Garros appearance and the 27-year-old Schuurs is known for her deft volley skills. The Czech-Dutch combination won the Cincinnati title in August.

Alex de Minaur (AUS)/Matt Reid (AUS) v [3] Rajeev Ram (USA)/Joe Salisbury (GBR)
Men’s doubles, second round, Court 13, first match (7pm AEST start)
The all-Aussie duo of De Minaur and Reid face the No.3 seeds and reigning Australian Open champions. The 36-year-old Ram and 28-year-old Salisbury have been the best performing team on tour so far this season, amassing a 15-6 win-loss record. The American-British combination, who made the Roland Garros quarterfinals in 2019, defeated De Minaur and Reid in straight sets in the US Open second round last year.

Jordan Thompson (AUS)/Robert Lindstedt (SWE) v [1] Juan Sebastian Cabal (COL)/Robert Farah (COL)
Men’s doubles, second round, Court 13, second match
The 26-year-old Thompson and his 43-year-old Swedish partner, who are playing their second tournament together, take on the world’s top-ranked team in the second round. The No.1-ranked Farah and No.2-ranked Cabal won the Wimbledon and US Open titles last year and the Colombian duo are two-time semifinalists at Roland Garros. Thompson is looking to match a career-best doubles result in Paris, having made the third round in 2017.