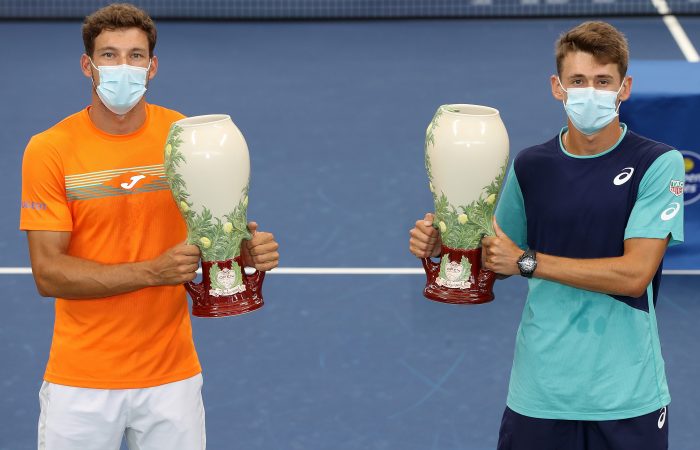 The first-time pairing captured the ATP Masters 1000 title with a 6-2 7-5 victory over British duo Jamie Murray and Neal Skupski in a rain-interrupted final in New York this morning.

After comfortably taking the opening set, De Minaur and Carreno Busta slumped to a 0-4 deficit early in the second set. They recovered to win six of the next seven games and were ahead 6-5 with a break, when rain forced them off court.

The match was eventually moved hours later under the Louis Armstrong Stadium roof, where De Minaur served out victory in the first game of the resumption.

The 21-year-old becomes the first Australian to win a Western & Southern Open men’s doubles title since Todd Woodbridge and Mark Woodforde in 2000. He also joins Davis Cup team-mate John Peers as the only Australian men to win an ATP Masters 1000 doubles title in the past 14 years.

Following this career-best run, De Minaur’s doubles ranking is projected to rise from No.131 into the world’s top 60. His previous career-high was No.130, achieved in March earlier this year.

De Minaur’s focus now turns to singles at next week’s US Open, where he is the No.21 seed.

> US OPEN: Find out who the Aussies play