Ash Barty and Alex de Minaur are among nine Australians contesting the main draw of the WTA/ATP Adelaide International at the revamped Memorial Drive. 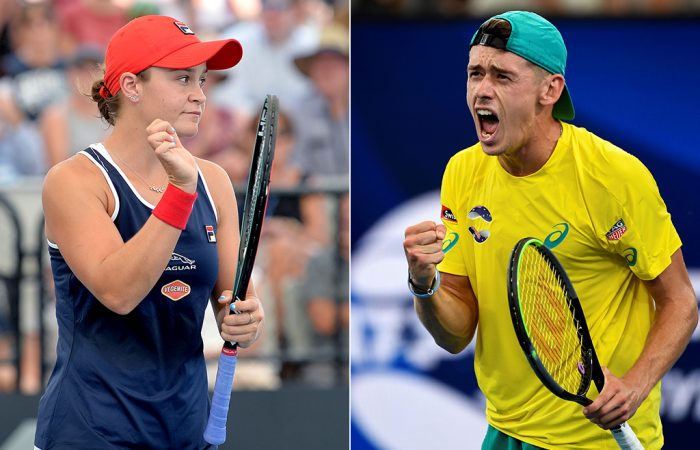 The road to the Australian Open doesn’t get any easier for Ash Barty when the world No.1 completes her preparation in Adelaide for the season-opening Grand Slam tournament.

Barty faces another tough week in Adelaide after her opening-round exit from the Brisbane International.

The world No.1 was handed a bye at Saturday’s draw and will play tough Russian Anastasia Pavlyuchenkova or Estonian Anett Kontaveit in her first match.

Hoping to bounce back from her loss to American world No.53 Jennifer Brady in her first outing of the summer, Barty is certain of a major test if she passes the second round of the Adelaide International.

The top seed is slated to run into former world No.1 and three-time Grand Slam champion Angelique Kerber, 2018 US Open winner Sloane Stephens, a qualifier or classy young Czech Marketa Vondrousova in the quarterfinals.

The other big names in Barty’s top half of the draw are Swiss fourth seed Belinda Bencic and American seventh seed Sofia Kenin.

Having lost to Frenchwoman Kristina Mladenovic in November in Australia’s heartbreaking Fed Cup final defeat, Barty is looking to avoid three-straight slip-ups for the first time since returning to tennis in June 2016 after an 18-month hiatus.

Adelaide will be Barty’s last tournament before arriving at Melbourne Park as the country’s first women’s top seed at the Australian Open since Dianne Fromholtz in 1977.

Australian No.2 Alja Tomljanovic, who received a wildcard, faces qualifier Yulia Puntintseva in the first round for the right to play second-seeded Wimbledon champion Simona Halep.

Priscilla Hon faces Barty’s regular doubles partner, German Julia Goerges, after also earning a wildcard, while Arina Rodionova, a qualifier, takes on Stephens in round one.

A great win for @arinarodionova, who beats 96th-ranked Anastasia Potapova 6-2 1-6 6-2 to qualify for the main draw of @AdelaideTennis.

Fresh off his ATP Cup heroics in Brisbane and Sydney, De Minaur also enjoys a first-round bye and will meet either Davis Cup teammate Jordan Thompson or Spaniard Albert Ramos-Vinolas in his tournament opener.

The world No.18 is projected to meet American eighth seed Reilly Opelka in the quarterfinals and Spanish fourth seed Pablo Carreno Busta in the semis.

Canadian world No.21 Felix Auger-Aliassime is the second seed in big-time tennis’s long-awaited return to Adelaide, where Australians James Duckworth, Alexei Popyrin and Alex Bolt have all received wildcards into the main draw.

Duckworth starts with qualifier federico Delbonis, with the winner to play Auger-Aliassime.

Popyrin is up against Serb Laslo Djere and Bolt opens against Frenchman Pierre-Hugues Herbert.