Molik on Fed Cup final: “We gave everything today”

Alicia Molik says she has “no regrets” about how the Australian team prepared and performed in the Fed Cup final, but that the loss to France “hurts a lot”. 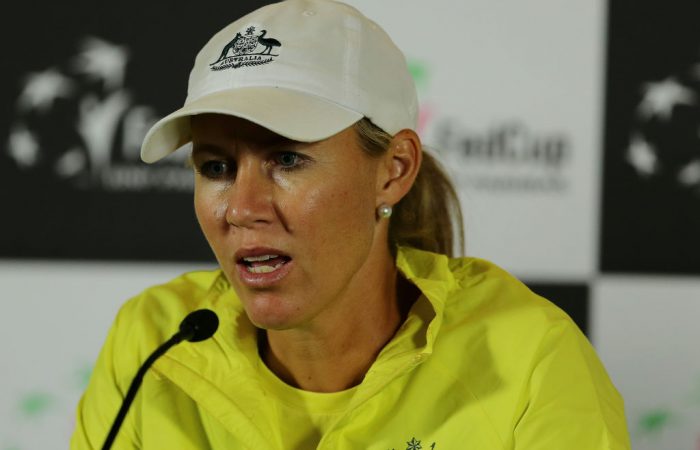 Australia came tantalisingly close to its first Fed Cup title in 45 years, only to fall short in the fifth and decisive doubles rubber to France.

The Australian squad fronted the press after the loss, visibly devastated after such a narrow loss in the nation’s first Fed Cup final in 26 years.

It was the green-and-gold’s ninth consecutive loss in a final dating back to 1975, but captain Alicia Molik was steely when responding to that statistic.

“We’ll take the tenth, I assure you that,” she said.

“We gave everything today. We fell just a fraction short. That happens.

“I don’t regret any step of the way. We’ve had to come together for such a long period of time now. We’re such a close-knit team. We’ve faced so much adversity. We’ve done that for the last few years and this year particularly in Asheville and Brisbane. We were up against it for so much of the time.

“Even today, we were up against it and fought our way back to put ourselves into the position we want to be in, quite frankly, with the last rubber resting on the doubles.

“But credit to France and gee whiz, Kiki Mladenovic showed her true colours today. I think she carried all of the French team on her shoulders.

“It was an unbelievable display. She sort of took it out of our hands, I felt.”

It's not to be but what a weekend – what a year – from our team. 💚💛#FedCupFinal | #GoAussies pic.twitter.com/WjwHQ9u5rB

Despite the disappointment, Molik was still able to point to a banner year in Australian women’s tennis, headlined by Barty’s breakthrough at the French Open and rise to world No.1.

Stosur enjoyed her best year on the doubles court in 13 years, returning to the top 10 after winning the Australian Open. Team debutants Ajla Tomljanovic, Astra Sharma and Priscilla Hon all posted career-high rankings, with Tomljanovic cracking the top 40 and Sharma the top 100.

Then there was the Fed Cup team’s thrilling run, and first home final since Kooyong in 1978.

“That’s going to be sad for us in particular, experiencing a home final, the Fed Cup, the ultimate in your home country. Unless the format changes (back) we’ll never have one of those again,” said Molik.

“So this was really, really special. I think that’s probably why it’s difficult for all of us to come to grips with losing, because it does mean so much.

“There are just times in sport where you fall short. I don’t regret a day of practice, of preparation we’ve had.

“I don’t have any regrets about this but, yeah, it hurts a lot, definitely.”

Molik believed the team could turn that hurt into fuel as Australia targets an eighth title in the team competition when the final moves to a 12-nation World Cup-style event in Budapest in 2020.

STOSUR: “I’m sticking around for a little while yet”

“I think there’s no question you become better from experiences, good, bad or indifferent. This one’s probably a bad experience,” Molik said.

“But it’s pretty amazing that this group of players get to feel what it’s like to be in the final.

“So now that we’ve been there, we’ve done that, the next step for us is to take the moments, if we receive that opportunity in Budapest going forward.

“The last couple of years we’ve expected to be a team which is always in the finals, and next year, because of our level, we’ll expect to be in another Fed Cup final.

“I think we’ll be stronger, more resilient and more prepared once more because we’ve lived this moment.”