Stosur: “I’m sticking around for a little while yet”

While Sam Stosur absorbed the disappointment of Australia’s loss in the Fed Cup final, the enduring veteran is focused on enduring career in the competition. 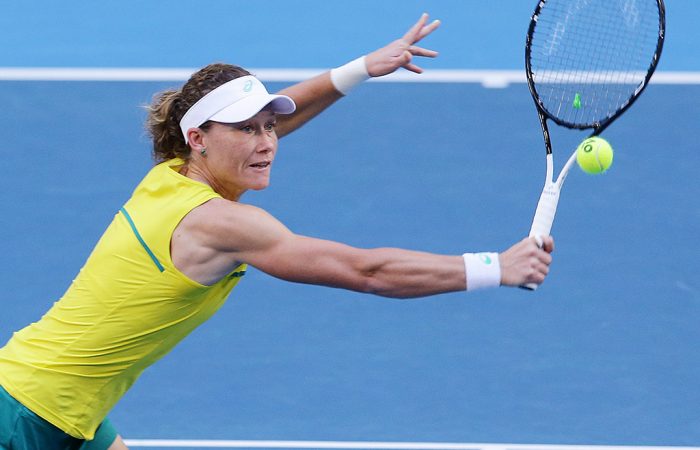 With a Fed Cup career now in its 16th year, it’s only natural that Sam Stosur would retain a big-picture perspective.

So as she absorbed the bitter disappointment of Australia just falling short in the Fed Cup final in Perth, the 35-year-old also had an important message – her representative career is far from over.

“I’m not retiring,” said the Queenslander. “I know 16 (more) years is a stretch but I’m sticking around for a little while yet.”

Addressing the media only a short time after the French duo of Kristina Mladenovic and Caroline Garcia had combined to claim the decisive doubles against Stosur and Ash Barty, it was understandable that the tearful Fed Cup veteran would feel a range of emotions.

“Right now, it’s obviously just really disappointing,” Stosur admitted. “But like Ash said, I think we do have to take some perspective and realise what we have achieved as well this year. And all the times we wore the green and gold, what we do for the team.”

That positive outlook not only helped drive Australia’s progress to the 2019 final – with down-to-the-wire wins secured against USA in Asheville and Belarus in Brisbane – but also underlines optimism for the future.

Stosur is not only buoyed by the stellar presence of world No.1 Ash Barty, but also encouraged by Ajla Tomljanovic’s successful debut and impressive progress from emerging players Priscilla Hon and Astra Sharma.

“This is obviously a very hard moment but it’s a fantastic team to be a part of and all of these four girls are the future of Fed Cup,” added Stosur, who was honoured with a Fed Cup Award of Excellence ahead of the final.

“I won’t be around for 16 more years (laughs) but these girls may well be, so we’ve got the future in good hands.”

Meanwhile, there’s still much for those younger players to learn from Stosur.

The Queenslander holds the record for most Fed Cup singles wins (29) by any Australian woman but competed in doubles only in this weekend’s final.

It meant supporting her team-mates through four singles rubbers before she took to the court at RAC Arena.

“It was a bit of a different scenario,” Stosur conceded.  “I haven’t quite done it like this before, but you know, I was prepared for this.

“I was more of the positive thinking that Ajla could come back in that last match and went inside and got myself ready and composed. I tried to do everything possible to go out there and play well.”

Earlier, Stosur and team-mates had spent months looking ahead to the highly anticipated decider.

“There’s been probably not too many days where this moment wouldn’t have popped into my head in the last six months since Brisbane,” Stosur reflected.

“But I think all four players on court, all members of both teams wanted it badly. So it’s unfortunate that we’re on the wrong end of it tonight. It’s certainly a moment that we really wish wasn’t quite this way.”

Despite the disappointment, Stosur was quick to congratulate Australia’s winning opponents.

“Unfortunately, it wasn’t to be for Ash and myself but credit to Kiki and Caro,” she added. “I think they played a great match today.”

Grace in defeat is another lesson for Stosur to provide to others. And in an enduring career, the Queenslander is proud to lead by example.