“Even though it's bloody tough now, in a couple of days' time I think we'll be right,” says the pragmatic world No.1. 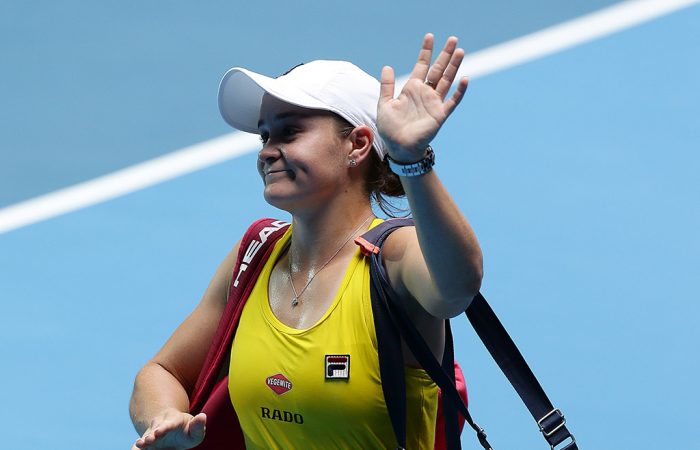 Barty wept on court during the trophy presentation after she and Sam Stosur went down 6-4 6-3 to France’s Caroline Garcia and Kristina Mladenovic in the decisive doubles rubber.

The world No.1 was nonetheless able to see the bigger picture – that a first Fed Cup final for Australia in 26 years, played in Perth in front of record crowds, capped an exceptional season.

“Personally I wouldn’t want to be sitting here with anyone else,” Barty said.

“It’s been an amazing journey. An amazing time of year for us. To be able to be in a Fed Cup final is something that’s very precious. We’ll cherish it and it will drive us more for next year.

“Playing in front of almost 14,000 Australians for me is incredible and it’s a really, really special time of my life. I think each Fed Cup tie that we’ve had in Australia is gaining more and more attention and exposure.

“I think you can see how much it means to all of us and obviously it’s bitterly disappointing to be sitting here. I think it’s going to be a tough one. This is something that all of us have been looking forward to for six months.

“Now it’s about resting, recovering and reflecting on the year that’s been, for me. But I think for all of us, just in a Fed Cup specific point of view, the journey that we’ve been on is simply remarkable, in the last two years, it really has.”

Barty earlier on Sunday lost to Kristina Mladenovic in the first of the reverse singles rubbers, snapping her incredible unbeaten run of 15 straight matches in the competition.

Sunday marked her first losses in the team competition since February 2017.

She came into the tie having just won the WTA Finals and ending the season as the world’s top-ranked player.

She then completely overwhelmed Garcia in an opening-day masterclass to level the tie at 1-1 after Mladenovic had beaten Ajla Tomljanovic.

Yet her momentum, and reserves, eventually ran out.

NEWS: “I’m sticking around for a little while yet,” says Stosur

“I think for me there were things that I would have liked to have done a little bit differently but I think overall I still have no regrets. It’s been an incredible season for me.

“I fought with everything, I’ve given everything that I absolutely could for this team.”