Kristina Mladenovic recovers from a set down to end Ash Barty's 15-match Fed Cup winning streak, putting France one rubber away from the 2019 Fed Cup title. 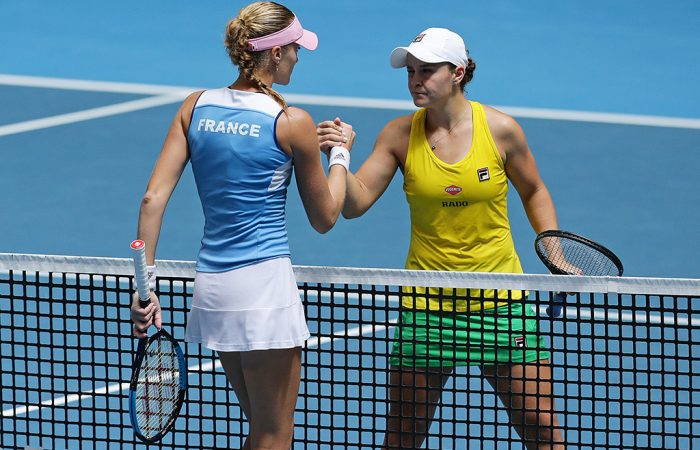 Kristina Mladenovic has put France within one victory of the 2019 Fed Cup trophy thanks to a thrilling upset victory over Ash Barty on Sunday in Perth.

In a battle between the No.1 singles players from each country, Mladenovic overcame Barty 2-6 6-4 7-6(1) to end Barty’s 15-match winning streak in the competition.

“We kept on fighting every single point — that’s the way I love to play my tennis,” an emotional Mladenovic said on court.

“Ash is world No.1, she’s just a huge champion. I lost the first set but then it was about details and at this level when you play the world No.1 you can’t give away opportunities.

“I just kept believing because I felt I was out there fighting and giving a hard battle and I’m just so proud how I keep pushing and obviously won at the end.”

France lead after a fantastic tiebreak from Mladenovic.

With France now ahead 2-1, Ajla Tomljanovic will come out against Pauline Parmentier — a substitution for Caroline Garcia — in a bid to keep the host nation alive in the final.

Should Tomljanovic win, the tie will extend to the fifth and decisive doubles rubber, for which Barty and Sam Stosur have been nominated.

The result certainly did not look likely when analysing the early stages of the match.

Just like on Saturday, when she thumped Garcia 6-0 6-0, Barty was locked in from the first point, delivering two aces in the opening game to hold for 1-0.

Yet unlike Saturday, when she beat Tomljanovic 6-1 6-1, Mladenovic began nervously, double-faulting to hand Barty a break point, which the Australian converted with a volley winner for a 2-0 lead.

When Barty streaked ahead 3-0, the world No.1 had won 15 consecutive games in her first Fed Cup final.

Mladenovic snapped that streak with a service hold to love in the fourth game, getting on the board at 1-3. And this was a hold that sparked her to life – she suddenly looked more engaged, was swinging more freely, and went on to win nine straight service points.

Still, Barty did enough to maintain her lead, despite the Frenchwoman elevating her performance.

It's a full house at the RAC Arena in Perth and the home fans are loving this tennis from @ashbarty!

In the fifth game, the Aussie charged the net to win one point, smacked a forehand winner to collect another, and closed out the game with a powerful serve-forehand combination for a 4-1 lead.

In the seventh game, she worked the points beautifully, her diverse repertoire of shots helping push her ahead 5-2.

In the following game, Mladenovic crumbled after leading 40-15; two errors brought scores to deuce before Barty rolled an angled forehand winner to bring up set point. When Mladenovic dumped a forehand volley into the net, the first set was Barty’s.

A slip in concentration and a wayward forehand saw Barty fall behind 0-40 in the opening game of the second set. Impressively, she dug in, fending off five break points in a tense game – Mladenovic was just centimetres away from landing a powerful return winner to break – to edge ahead 1-0.

From here, games went on serve, although Barty always looked the more likely when serving first, moving ahead 4-3 and earning a break point in game eight when Mladenovic double-faulted.

Yet Barty missed a forehand passing shot on the next point, and Mladenovic escaped.

With that escape came an emboldened attitude; she slotted two identical running crosscourt backhand passing shot winners en route to her first service break of the match and a 5-4 lead, and served out the second set in the next game after three Barty errors.

By now, Barty was flustered and her game cluttered with errors, while Mladenovic’s confidence was soaring. The Frenchwomen, ranked 40th, surged ahead 3-1 and earned a break point for a 4-1 lead.

But then, another twist.

Barty escaped from that fifth game with a service hold and broke serve in the next game to level scores. And with more pop on her first serve and aggressive instincts returning, Barty volleyed a winner to lead 4-3.

Mladenovic reclaimed the momentum in the ninth game, benefitting from three straight Barty errors to break for a 5-4 lead.

Yet serving for the match, she was broken at love.

Barty looked the more likely when she produced clutch tennis — a forehand winner, an ace and an unreturnable serve — to save three break points in the 11th game and hold for 6-5.

What a volley, what a hold!

But after Mladenovic held serve to send the set to a tiebreak, she was the superior player, dropping just one of the next eight points to score an unlikely triumph.

“I came back from a break down twice in the third set and Kiki just played a more aggressive tiebreak so I think from my point of view I fought as hard as I could,” Barty said.

“Probably give me half a dozen forehands back again, that I’d love to try and hit again or do something different with, and maybe I’m sitting here with a different result.”