Australia and France are locked at 1-1 in the Fed Cup final in Perth after Ash Barty dismisses Caroline Garcia without losing a game. 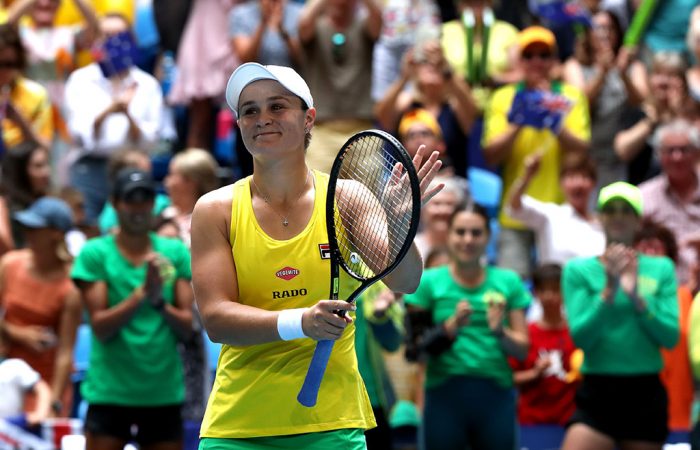 “I felt like in the first three or four of my service games I was in control of a lot of the points, and Caro is a player who like court position, she likes to be up in the court.

“So that was a key factor for me today. And that’s probably the best I’ve returned in a long long time.”

"I think that's probably the best tennis match I've ever played in my life." – @ashbarty

The two dominant victors will clash in the first of the reverse singles rubbers on Sunday.

Barty has arrived in Perth fresh off her victory at the prestigious WTA Finals in Shenzhen, a week that had cemented her position as year-end world No.1

The 23-year-old carried that form and confidence into her match against Garcia, a player against whom she had a history of close battles against – including a three set win just over a month ago in Wuhan.

Yet this time, Barty completely overwhelmed the Frenchwoman, streaking ahead 3-0 and extending that lead to 4-0 with a forehand passing shot winner.

Garcia dug in during the sixth game, which extended to six deuces.

The former world No.4 saved four set points, yet she could not fend off a fifth.

And with the first set in hand, Barty hit out even more impressively in the second. She ended the first three games with a flourish – an ace for 1-0, an inside-in forehand winner for 2-0, an unreturnable serve for 3-0.

Garcia by this point was completely bewildered, unable to properly read Barty’s patterns of play and array of shots, nor extend a rally without eventually breaking down in errors.

She sprayed a forehand wide to fall behind 4-0, yet found some range and velocity on her forehand to arrive at 15-40 in the fifth game.

Barty simply erased those break points with stellar serving, beginning a run of four straight points which pushed her ahead 6-0, 5-0.

She broke Garcia once more in the following game, ending the contest with 15 winners to Garcia’s three while making just nine unforced errors.

First time Garcia has ever been double-bagelled.

Under such pressure to deliver a point, Barty was extraordinary. Her 15th Fed Cup win in a row. #FedCupFinal

The last time Barty beat an opponent 6-0 6-0 came more than three years ago in the qualifying rounds of the WTA Nottingham tournament in 2016, when she trounced Xu Yifan in just her second tournament into her comeback after a near two-year hiatus from tennis.

“I don’t think that’s really something that’s important to me,” Barty said of the dominant scoreline.

“I think it was just nice, in particular, that 4-0 game in the second. I backed myself into a little bit of a hole, giving Caro a look at two or three second sevres in a row and I think I really wanted to earmark that game, to get myself out of it and to try and keep that momentum going for us.

“Caro’s a good friend of mine — it’s obviously a tough one to swallow, I’ve been on the back end of them as well.

“Absolutely (she can bounce back).”

Australian No.2 Tomljanovic admitted both her serve and nerves let her down during her loss to Mladenovic in the opening rubber.

Prior to the tie, Tomljanovic admitted that she was “definitely aware” of how big the occasion was and how it was “a bit odd” for a player to making her Fed Cup debut in a tie of this magnitude.

Yet nothing could have prepared the 26-year-old for the feeling of walking out into RAC Arena before more than 10,000 fans for the opening singles rubber of a Fed Cup final.

“It’s not something that you can really kind of explain — it’s just a feeling that I had just walking out even for the ceremony,” she said.

“It’s really unique, you’re not playing for yourself, you’re playing for the whole country, for your teammates. It would be easier if they were all not nice so you wouldn’t really care (smiling).

“That’s just my personality — I want it even more when it’s for others, and for my teammates and my country.

“However it ended up being, the feeling that I felt, if I wasn’t in this position I never would have felt that. And I definitely don’t take that for granted. It would have been really special to get the win but this was definitely a privilege regardless.”

An Impressive start from Kiki Mladenovic.

Tomljanovic struggled on serve against the free-swinging Mladenovic, dishing up seven double faults, landing just 42 per cent of her first serves and winning only 57 per cent of first-serve points, compared to Mladenovic’s mark of 83 per cent.

“I don’t think I started off so bad, whereas she just didn’t give me much. And I think when I gave her too much of a lead she just started swinging even more. She was seeing the ball huge,” Tomljanovic said.

“My (serve) percentage was low from the beginning and then even when I got a couple in she read it well. I think the serve was a big factor today.”

Barty said she did not feel extra pressure coming out for the second singles rubber, despite Australia trailing 1-0 and needing victory to avoid a perilous deficit.

“For me (the preparation) doesn’t really change,” she said.

“Obviously I watched a little bit of Ajla’s match and I felt like it was a lot closer than the scoreline suggested — a little bit of scoreboard pressure early and maybe that match completely flips on its head.

“Whether we’re 1-0 up or 1-0 down, it’s still about me doing what I need to do to prepare in a way that gives myself the best chance of winning, which in turn helps the team. So that’s all of my focus.”