Ash Barty hopes victory over Kristina Mladenovic in the first of the reverse singles will put Australia on course for its first Fed Cup title in 45 years. 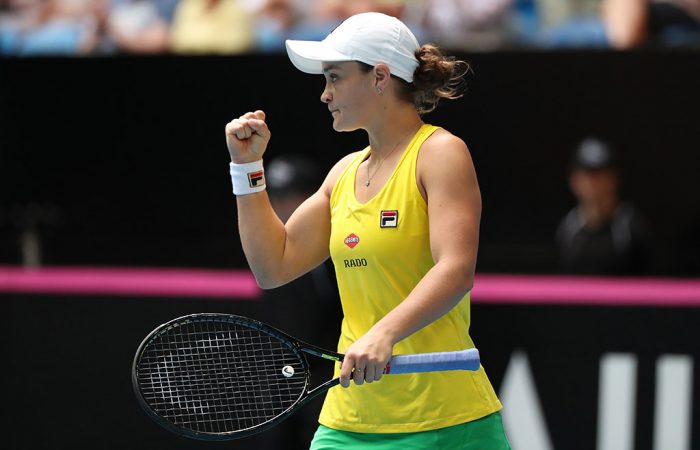 Ash Barty lost her only previous singles meeting against Kristina Mladenovic in May. Yet the world No.1 believes it could be a different outcome this time around when they meet on Sunday in the Fed Cup final.

Barty and Mladenovic are scheduled to play in the first of the reverse singles rubbers at RAC Arena in Perth to kick off the second and final day of action.

Mladenovic was dominant in beating Ajla Tomljanovic 6-1 6-1 in the first singles rubber on Saturday, only for Barty to level the tie at 1-1 with an even more commanding 6-0 6-0 victory over Caroline Garcia.

It promises to be a fantastic spectacle when the Australian and French No.1s clash on Sunday.

“Obviously Ajla and I play very different game styles so it’s hard for me to take much from that match (today) in particular, but having played (Mladenovic) in Rome earlier this year, I know that she has the weapons to be able to make me uncomfortable,” Barty said.

“So it’s about trying to nullify those as best as I can and bring it back to my tempo of match.

“(When we played in Rome in May) it was a different surface, completely different time of the year, and I feel like I’ve changed and developed as a person and a player since that match.

“I know that Kiki’s most comfortable on clay but now we’re back on hard courts in Australia, so I think I’m really looking forward to it tomorrow to try and turn the tide a little bit.”

Australian Fed Cup captain Alicia Molik said the team would discuss Sunday’s singles line-up when they were back at their hotel.

“It’s a good position to be in. It’s very familiar. Throughout this year, in fact many ties last year, we’ve sat at 1-1 coming into day two,” she said.

It is not yet known whether Tomljanovic will come out again for the host nation, but the 26-year-old said she could bounce back from the disappointment of defeat if she was called upon to play.

“Yeah, I mean if I’m in the position, I definitely feel like I can. It’s tennis, and it can happen,” she said.

“I definitely think I would know what to expect more from how I’m feeling, so yeah, I’ll definitely hope so anyway.”

Molik said she would aim to keep Tomljanovic “positive and buoyant” after a Fed Cup debut during which Tomljanovic admitted the nerves of the occasion affected her.

“(There are) not many tournaments where you get a second bite at the cherry immediately the day after. What a brilliant situation to be in,” Molik said.

“Tough loss – I know she was nervous. It’s normal, in a first match. And I know she’s excited about tomorrow if she gets the nod.

“(She’s) maybe a little down after the loss, but maybe watching Ash and the scoreline that Ash produced, probably makes her feel that little bit better.”

Molik did not rule out substituting in another player for the second reverse singles rubber, such as the experienced Sam Stosur, or even another debutante like Astra Sharma, the 24-year-old from Perth selected among Australia’s five-player squad.

“I think it’s fact (that nerves are part of) everyone’s first match in Fed Cup,” she said.

“Most recently I go back to Priscilla Hon in Asheville, (the doubles) was her first tie. Yeah, she was nervous, but she came through it. Ajla had a few nerves, didn’t come through it. It’s pretty normal in tennis.

“I think the beauty of being in a team though is it disperses some of those feelings, I think it helps the player. I wouldn’t be nervous to put in a player who’s on debut.”

Barty believed both Tomljanovic and Garcia could shrug off the disappointment of heavy losses and emerge emboldened for the second day of Fed Cup play.

On the line for Australia? A first Fed Cup title since 1974 in the team’s first final since 1993.

For Barty especially, it would be the culmination of an unforgettable season highlighted by her first Grand Slam title at Roland Garros and rise to world No.1.

Ash Barty shows the 13,109 fans at RAC Arena – a record Fed Cup crowd for Australia – just why she is world No.1.#FedCupFinal pic.twitter.com/U27EcodZIi

“I think both Ajla and Caroline are the ultimate professionals. It’s a very unique format, where you get the opportunity to back up the next day and really put in that extra effort and that extra positivity going into the next match,” Barty said.

“Overall, I just know that we’ve got one more really exciting day left in this season, I can’t wait to get out there first thing tomorrow morning and represent Australia kind of one last time for this year.”