Kristina Mladenovic gives France the perfect start in the 2019 Fed Cup final in Perth with a commanding win over Australian debutante Ajla Tomljanovic. 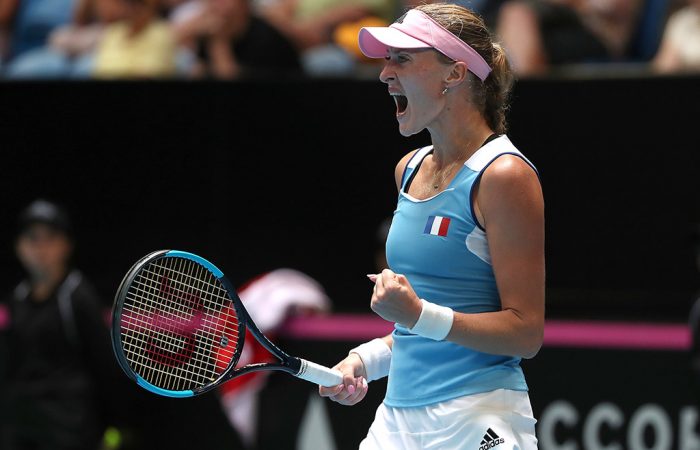 Kristina Mladenovic stormed to victory over Ajla Tomljanovic in the first singles rubber of the 2019 Fed Cup final to give France an early lead over Australia in Perth.

Mladenovic overwhelmed the debutante 6-1 6-1 in 71 minutes on Saturday at RAC Arena to put the visitors in a strong position on the opening day of the tie.

World No.1 Ash Barty will next take on former world No.4 Caroline Garcia in the second singles rubber in a bid to draw the hosts level.

“I really did almost a perfect match, I was really in the zone,” Mladenovic said on court.

“For sure it’s tough for Ajla playing straight away in the final, but I think she played good. She’s a good friend of mine and I think the level was great.

“I came out there and I just wanted to win, basically.”

It's not to be for Ajla on her debut, a stunning performance from Kiki Mladenovic gives France the early lead.

Tomljanovic conceded she felt the pressure of representing her country for the first time more than she thought she would.

“I think it was such a unique experience and feeling. I don’t think I’ve ever felt it before,” she said.

“I definitely wish I could have done better in the circumstances, but at the end of the day I did give my all and it just didn’t really go as planned.”

Controlling the centre of the court, Mladenovic exploited the understandable early-match nerves of Tomljanovic, who was playing for the first time for Australia.

Tomljanovic, struggling to hit through the court, arrived at 40-15 in the third game only for the Frenchwoman to reel her in and break serve for a 3-0 lead.

The Aussie broke through in a compelling fourth game, erasing two game points for Maldenovic and breaking straight back to get on the board at 1-3.

Yet Mladenovic was not phased. She responded with simply more firepower, brutalising Tomljanovic’s second serve and not losing a game for the remainder of the first set, during which she belted 10 winners — including nine from her forehand wing.

Mladenovic simply grew in confidence from this point, winning the first nine points of the second set and notching an eighth consecutive game to build a 6-1 5-0 lead.

Tomljanovic was still yet to hit a single winner but as she served to stay in the match she found two on consecutive points, slotting a forehand volley winner and backhand winner down the line.

She would go on to hold serve and briefly stop Mladenovic’s run, yet the former world No.10 would not be knocked off course.

Mladenovic calmly served out the match and finished the contest with 16 winners to Tomljanovic’s two.

“I have amazing memories from winning Hopman Cup on exactly this court, so for me, this court is like home, and I really enjoy playing out here,” Mladenovic said.

“I love fighting and I’m so proud to give this first point to my team, to my country, to our supporters.”