With the entire Australian squad having now practised together, Fed Cup captain Alicia Molik is encouraged by the hosts’ form ahead of this weekend’s final. 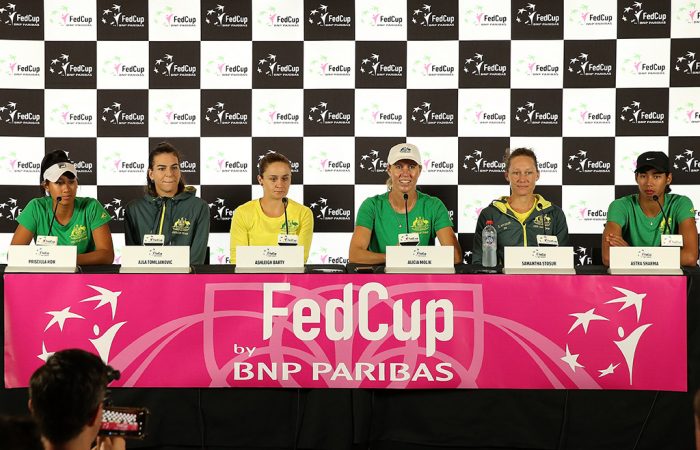 Ash Barty enjoyed her first hit-out with the Australian squad on Wednesday as Fed Cup captain Alicia Molik continued to put the team through its paces in the lead-up to the final against France.

Barty had a day earlier arrived in Perth fresh off her title-winning run at the WTA Finals, which cemented her position as the year-end world No.1.

She and Sam Stosur combined for a doubles workout against Priscilla Hon and Astra Sharma, while Stosur and Ajla Tomljanovic battled it out during singles practice.

This all unfolded in the sunny surrounds of Perth’s RAC Arena, which Molik said suited the team enormously for a blockbuster tie against a formidable French squad.

“It’s a really beautiful stadium … having the roof open too, the warmer weather, it’s something we’re familiar with, we like, and I know all of the players have really enjoyed the stadium and also the surface, and we’re just really hitting our groove,” Molik said.

“We can’t wait of the weekend. It’s starting to warm up and that’s pretty natural for summer in Australia – I think it will really suit us.”

Earlier on Wednesday, French captain Julien Benneteau said it was hard to go past Australia as favourites for the final, given they had a world No.1 in their team as well as hosting the tie on home soil in front of thousands of Aussie fans.

Yet Molik was quick to point out the credentials of the French team, which has remained largely unchanged since they last appeared in the final just three years ago.

“They’ve reached a couple of finals very recently – we haven’t. This is our first in a long time.

“On the flip side we’ve got a couple of players, in particular, Sam and Ash, who are bringing in a lot of momentum from last week (at the WTA Finals in Shenzhen).

“We bring match conditions and match momentum into a tie, which is always my preference.

“Kiki (Mladenovic) has (also) come off the back of her doubles win, so what it does make for is I think a lot of form players. That’s what we want, I think that’s what the public wants, players at their best.

“I think that’s why it’s going to be such a brilliant spectacle.”

Although the French have four players ranked inside the top 65 in singles, Australia also has no shortage of options when it comes to singles and doubles duties on the weekend.

The inclusion of world No.51 Ajla Tomljanovic in the team has made competition for the second singles spot behind Barty far hotter.

TOMLJANOVIC: “I’ve been looking forward to this for a long time.”

According to Molik, Stosur, Hon and Sharma are all in the running for a call-up in addition to Tomljanovic, who said she was thrilled to finally make her Fed Cup debut after becoming an Australian resident five years ago.

“I don’t know if it’s ever happened that someone just comes in and joins the final. I’m definitely not complaining but I know it’s a bit odd,” Tomljanovic said.

“If I got the chance to play obviously I would be super honoured and I would step up to the task. As Alicia said, there’s so much depth in our team that whoever gets the spot I think is going to do a great job.”

World No.96 Stosur, who this week cemented an incredible 16th consecutive year-end top-100 finish, said that competition for team selection was fierce, yet friendly.

“I think (our practice session) was just showing that we want to be out there and not only trying to play well for yourself, but you also don’t want to let your teammates down and have and average session either,” she explained.

“I think that’s the way all of us practice all the time … looks really serious but we’re on the sidelines having a chat at the change of ends.

“It’s just good being out there as a team and doing whatever we can to be prepared for your own self and for the rest of your teammates.”

Barty, meanwhile, was thrilled to touch down on home soil and join her teammates for a week she said she had been targeting all year.

She admitted on the latest episode of the WTA Insider Podcast that she had been running on adrenaline in her last week of the regular season at the WTA Finals.

Yet the 23-year-old Queenslander, undefeated in her past 14 Fed Cup rubbers, said she would have no trouble recharging ahead of this weekend’s action in Perth.

“I’m feeling great. It was nice to get out there in a pretty cruisy, light-hearted hit, just to work on a little bit of doubles stuff,” she said.

“I know what I need to do to be right to play on the weekend. There’s no different preparation for what I would do from a normal tournament.

“It’s just pretty special that I get to wear Australia on my back all week and then hopefully finish off the year really well.

“There’s nothing better than playing in the green and gold. And representing your country. It’s a format that I love, I cherish it.

“This is going to be a really precious week.”