Tomljanovic: ‘I’ve been looking forward to this for a long time’

Australian Fed Cup debutant Ajla Tomljanovic continues her preparations with the team in Perth ahead of this weekend's final against France. 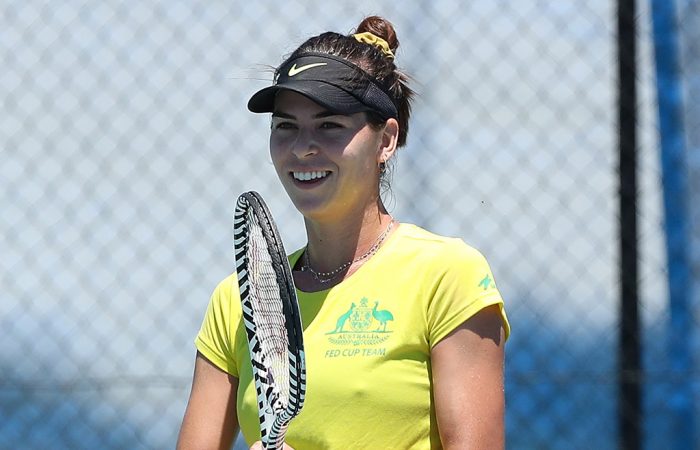 There were nerves for Ajla Tomljanovic as she took part in her first training session on Sunday as part of Australia’s Fed Cup team.

Those nerves were two-pronged. Firstly, they related to her inexperience among the Australian team environment. And secondly, she was keenly aware of the occasion for which she was making her Fed Cup debut – as such an occasion rarely comes bigger.

The nation’s second highest-ranked female singles player will be a huge asset when the Aussies face an experienced, versatile and talented French line-up headed by former top-10 players Kristina Mladenovic and Caroline Garcia.

“I think I was just maybe a little bit nervous coming in, just because I’ve never been a part of this team yet. Even though I know everyone individually, I think it’s still different than being part of a team,” Tomljanovic told tennis.com.au on Monday of her first practice session.

“Now that I think about it, it was pretty dumb that I even felt like that before (smiling).

“Leading up to it, all the players I really have good relationships with them and we always kind of talked about it (me joining the team) and they were always welcoming me before the decision arrived.

“Yesterday and today has actually been really fun, and so different than what we do all year. I guess in a way it exceeded my expectations — I don’t know why (laughter).

"Ash has been just so inspiring, ever since her comeback. What she's done for tennis in Australia is pretty unbelievable. So I think we all just try to draw from her." – @Ajlatom #FedCup #GoAussies pic.twitter.com/F1PCPhQOfk

Tomljanovic became an Australian resident in 2014 but it has taken almost five years for the 26-year-old to be able to represent her adopted nation.

And she hopes taking part in the tie – and hopefully winning it – will cap a season which has already been a memorable one.

Tomljanovic has reached one WTA final (Hua Hin), two semifinals (Zhengzhou and Rabat) and another two quarterfinals, and also attained a career-best ranking of No.39 in April.

“I’m definitely aware (of the occasion). It’s pretty incredible. It’s one of those things that you’re nervous about, but it’s the good kind of nervous,” she explained.

“Once I started the whole process (of representing Australia in Fed Cup) a long time ago, in my head I was like, ‘Oh I’m going to be playing in no time.’ And then it kind of took a little bit longer than I thought, I guess.

“This year I told myself, ‘I’m not going to think about it’, just because I don’t want to get my hopes up and then get crushed.

“So when I got the call from Alicia (Molik), I was definitely shocked and it came at such a good time because I think I just had lost in China.

“She was like, ‘Would you be open to playing?’ And it was kind of funny to answer that because I’ve been looking forward to this moment for a long time. So I’m just really excited that I finally have the opportunity.

“I don’t think I’ve ever been a part of something so major in my career.”

Tomljanovic’s long journey towards finally getting to wear the green-and-gold colours has spanned a similar time to the journey she took in returning to the top 50 following physical setbacks.

It was in 2014 she advanced to the fourth round of the French Open – her best Grand Slam result – and in February 2015 she set a then career-high ranking of No.47. But by 2016, she required shoulder surgery and missed an entire year. She returned in 2017, yet by the end of the year she was still outside the world’s top 150.

It was only in 2018 that she really began to rediscover her best, advancing to two WTA finals – Rabat and Seoul – and completing her first top-50 season.

Then came 2019, a year during which Tomljanovic took time to reflect on the progress she had made.

“I’m usually not the one to get sentimental over that stuff, but I woke up and I was just thinking – this (career-high ranking) hasn’t happened since my shoulder surgery,” she said.

“I was sitting with my team back home and we were all just like, ‘This is a moment we have to kind of remember and be happy about.’ Because it’s been a long time coming, and only the people in your circle know what you’ve been through, so it’s definitely really rewarding.

“It was a pretty solid year and it’s pretty nice to top it off with a Fed Cup final and possibly getting the title. I’m just really happy to get the chance to end my year on a high with the team.

“I’m always going to remember it and it’s going be something I always cherish, so I’m really excited.”