France the underdogs, but options aplenty

French Fed Cup captain Julien Benneteau admits he faces a selection ‘headache’ when announcing the line-up for this weekend’s final in Perth. 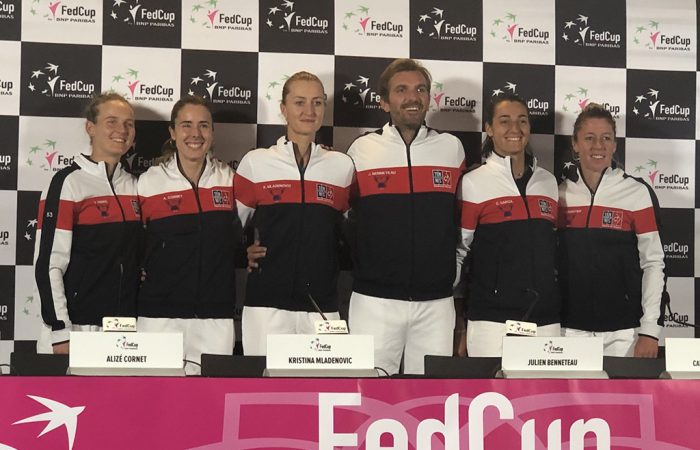 They possess one of the deepest squads of any Fed Cup team in the world, yet France have positioned themselves as underdogs for this weekend’s blockbuster final against Australia in Perth.

Four of the five are currently ranked in the singles top 70, with Mladenovic and Garcia former top-10 players and Cornet a former world No.11.

Yet Benneteau is wary of an Australian team spearheaded by world No.1 Ash Barty and two Grand Slam singles and doubles champions in Barty and Sam Stosur.

“I don’t know if we have advantage — when you play a Fed Cup final with the No.1 in the world in the other side, and away, you cannot say that you have an advantage,” he said on Wednesday.

“But for sure, me, I have a lot of options for singles and doubles. During the first two rounds we proved that we have won the ties with two, three different players who played in singles.

“For us it’s an advantage because you never know what can happen on Saturday in the first two singles. It can be very hard physically and mentally, and then the Sunday it’s a huge day with two singles and one doubles, so a lot of options for sure.

“It’s kind of headache for me during the week, but the weekend, it’s a privilege.”

The French squad has been buoyed by the arrival of Mladenovic, who joined the team from the WTA Finals in Shenzhen.

Shenzhen is where Barty won the singles title, yet Mladenovic, playing with Timea Babos, beat Stosur in the doubles semifinals and ultimately went on to win the title.

She is France’s highest ranked player in both singles (at No.40) and doubles (No.2), and also beat Barty in their only singles meeting in Rome in May.

“Last week I was there (in Shenzhen) for myself and really focused on my work, on my competition — I was there to win with my partner. But the advantage is that I’m here for a while, it’s the same time zone … it was super easy to fly over,” she said.

“I almost had no adjustments, except for the surface and ball a little bit. The turnaround is pretty quick.

“I played against Sam in doubles so it could give a little bit of a preview in case the doubles happens here. Obviously we all know Ash really good.

“I had time to scout her matches, that’s for sure. Ready to go and looking forward to the tie this year.”

Another ace up the French team’s sleeve is the fact three of their players – Mladenovic, Garcia and Cornet – have all played at RAC Arena when representing France at Hopman Cup.

“It’s just amazing to back – first time I stepped in on the court yesterday I had such great memories and great vibes,” Mladenovic said.

“I just want to thank the Australian team for hosting the Fed Cup final in a place like this. It’s definitely an advantage when you know the court and where you’ve won in the past … and you feel like you can repeat the story.”

Cornet’s face beamed when she entered the stadium on Tuesday for France’s first team practice at the venue. “I can’t wait for the stadium to be packed, as it used to be in Hopman Cup,” she said.

“We also have few French supporters so I think they will need to be very noisy to be able to match the Aussie crowd but definitely good feelings on this court and very happy to be back in Perth.”

When it comes to this stage of the competition, France have the upper hand on the Australians.

Australia’s last appearance in a Fed Cup final came back in 1993 but the French advanced to the 2016 final with a line-up practically unchanged from the team they have fielded three years on.

For Benneteau, this is another factor giving him reason to be quietly confident as the final looms nearer.

“I’m happy with this team,” he said. “All the five are a good chance to play in singles.”