World No.1 Ash Barty makes her first appearance on Centre Court in 2019 while John Millman takes on in-form Sam Querrey in round three. 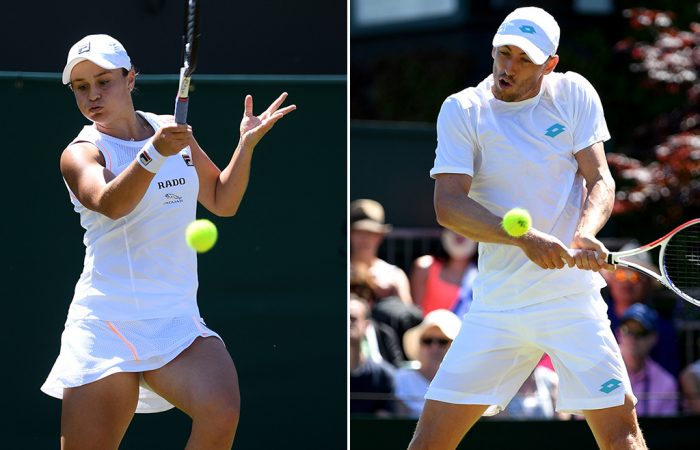 World No.1 and top seed Ash Barty opens the Centre Court schedule on Saturday, shooting for a place in the fourth round at Wimbledon for the first time.

The match will commence at 1pm local time (10pm AEST) after John Millman kicks off the Court 17 schedule against Sam Querrey at 11am local time (8pm AEST).

Barty, as well as compatriots Sam Stosur and Ajla Tomljanovic, will be in action in women’s doubles while four Australian juniors – Rinky Hijikata, Annerly Poulos, Dane Sweeny and Tristan Schoolkate – take to the courts for their first-round singles matches.

John Peers teams with Zhang Shuai in mixed doubles, while Monique Adamczak will play her second-round match with Philipp Oswald.

This will be the first meeting between Barty and Dart. Barty extended her winning streak to 14 with a straight-sets win over Alison Van Uytvanck in the second round, while Dart arrived in the last 32 for the first time at a Grand Slam thanks to a three-set win over Beatriz Haddad Maia.

“If I got to play on the court, it would be incredible. One of the most beautiful courts in the world,” Barty said on Thursday of her potential Centre Court singles debut.

“I wouldn’t be playing a British crowd; I’m playing against Harriet. Yes, she’ll get more support being in Britain, as I would if we were in Australia. It’s no different.

“There’s an element of danger against everyone you play. You have to make sure you know exactly how you want to play the match. I haven’t played with her before, haven’t hit with her. Obviously a little bit new for both of us.

“I’ll make sure that we’re prepared as best we can, we have a game plan, try to go out there and execute.”

Millman hasn’t dropped a set en route to round three, beating Hugo Dellien and 31st seed Laslo Djere along the way. His victory over Djere on Thursday set up a tussle with in-form Sam Querrey, who was a finalist in Eastbourne last week and who dismissed Andrey Rublev in straight sets in the second round.

The pair met twice on the Challenger circuit in 2014, with Querrey winning both those matches on Californian hard courts. They have not played since.

“He’s a really good grass-court player and he’s dangerous right now,” Millman said of Querrey, who reached the Wimbledon semifinals in 2017 and the quarters in 2016.

“Sam is really looking to end points quite quickly because he wants that first shot at that ball, so I’m going to have to keep up my quality at the back of the court and take those little half chances that’ll come my way.