Australia's John Millman advances to the third round at WImbledon for the second time while compatriot Alex de Minaur bows out in five. 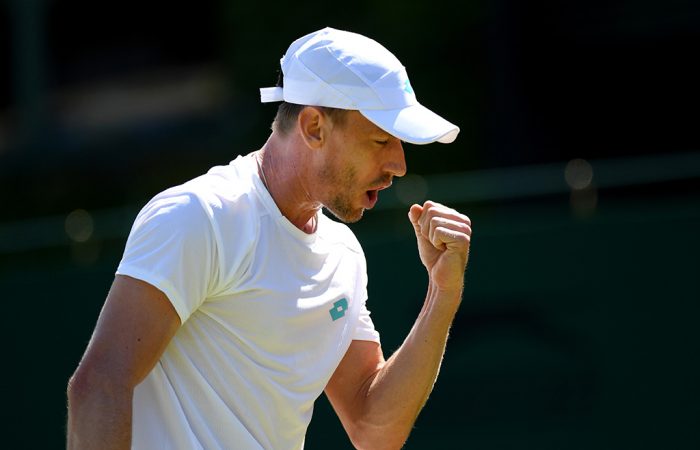 John Millman continued his excellent form at the All England Club, dropping just six games en route to the third round at Wimbledon.

At the same time on Thursday, 25th seed Alex de Minaur found himself in a tense struggle on Court 18.

Millman arrived at Wimbledon on a five-match losing streak, but after beating Hugo Dellien in straight sets said the result was “a weight off the shoulders”.

He certainly played like a man unburdened on Thursday, ousting Serbia’s Djere in just over two hours.

“I’m building. I knew that if I could get through that first one momentum would start to come, that confidence would start to come and that’s all it takes really,” said Millman, who kept his unforced errors to a tidy 19 while Djere sprayed 51.

“I still think I can hit the ball a bit better, but I was moving great today. The body felt really good, I returned really well and stuck to a game plan that we had going into that match.

“I made it physical. I brought a really good intensity and something that I’ve made a career of doing and executed really well today.

“I get to play another third round at Wimbledon and really looking forward to it.”

There he will meet Sam Querrey, the tall, big-serving American who reached the Wimbledon semifinals in 2017 and the quarterfinals a year earlier.

Querrey overwhelmed fifth seed Dominic Thiem in the first round before dismissing Andrey Rublev in straight sets on Thursday. The week before Wimbledon, Querrey was a finalist at the ATP grass-court tournament in Eastbourne.

“I’m going to have to keep up my quality at the back of the court and take those little half chances that’ll come my way. If I can do that, I’ll be a chance.”

It was a shattered De Minaur who fronted the media after his loss, during which he generated 10 break points – but could only convert three – and won more points (150 to 149) than Johnson.

“It’s a tough one to swallow, one of those matches where you come off the court and you still don’t know how it didn’t end up going your way,” he said.

“I felt like I did everything I could, everything in my power, gave myself that many chances and just could not put those important points together.

“It’s tough, because if I want to keep improving and keep rising up the rankings, I can’t let that happen.”

“There’s always positives, but I think at this stage right now in the moment that I am right now, obviously disappointed,” he said.

“But the body is feeling good. I’ve held up really well today. I felt like I could have kept on going. And now I’ll go with doubles tomorrow.

“After this tournament done, I’ll have some time off to sort of relax and hopefully start the US hard court swing with a bang.”