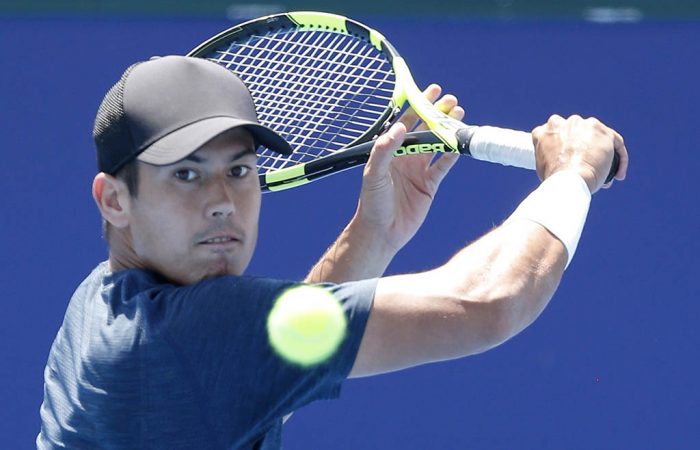 Jason Kubler is through to the second round of qualifying at the French Open but fellow Australian Thanasi Kokkinakis was forced to pull out of his match because of injury.

Former world junior No.1  Kubler, who is himself battling back from injury problems, posted a 6-4 6-4 win over Indian 24th seed Ramkumar Ramanathan at Roland Garros on Monday, setting up a meeting with veteran Serbian Viktor Troicki.

Troicki, 33, who beat German Kevin Krawietz 6-4 6-3, has reached the fourth round in Paris four times and is fighting back after a six-month break due to a back problem.

“I’m very happy because my expectation was almost a bit too high [in recent months] so I had to re-evaluate where I am and how much tennis I’ve been playing since the US Open,” Australian No.10 Kubler, 26, told the Roland Garros website.

“I rolled my ankle at the US Open, then I’ve sort of had that lingering knee injury and that came back, so I haven’t played too much tennis.

“It’s funny because when I was younger – probably 16 to 23 – I just played all clay … I was saying to the coaches I’ve been hitting on clay now for a couple of months now but it’s only last week I started feeling good on it so I’ve probably timed it pretty well.”

As Kubler progressed, compatriot Kokkinakis – who made the Roland Garros third round as a teenager in 2015 – was forced to withdraw from his opener with Czech 19th seed Lukas Rosol.

Kokkinakis was replaced in the draw at short notice by Amir Weintraub, but the Israeli was swiftly dispatched by Rosol 6-3 6-1.

Sydney’s James Duckworth was forced to retire against sixth seed Sergiy Stakhovsky while trailing 4-2 in the first set.

And his 22-year-old countryman Marc Polmans battled well but suffered a 6-2 1-6 6-3 defeat in one hour 55 minutes to Italy’s Gianluigi Quinzi.

South Australian Alex Bolt is due to play Spaniard Adrian Menendez-Maceiras on Tuesday, while Arina Rodionova and Kim Birrell will get their campaigns under way in the women’s singles on Wednesday.

But Thompson’s and Ebden’s preparations were dealt a blow as they bowed out of the Geneva Open on Monday.

Meanwhile, Tomic became another Australian injury victim when he was forced to quit his clash with Canadian Steven Diez in the ATP Lyon Open when 6-4 4-1 down on Monday.

Millman faces Canadian fourth seed Felix Auger Aliassime in the second round in Lyon on Tuesday.