Australians John Millman and Nick Kyrgios will meet in the first round of the ATP Delray Beach Open, where they are joined in the main draw by Jordan Thompson and Bernard Tomic. 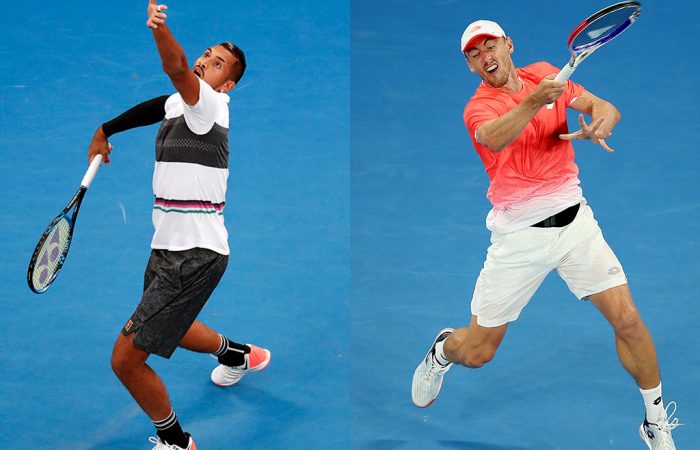 John Millman and Nick Kyrgios will meet for the second time on tour, aiming for a place in the last 16 of the Delray Beach Open in Florida.

Millman, seeded fifth, and Kyrgios, ranked 66th, played their only other match in the first round of the US Open in 2017, which was won by Millman in four sets.

The winner of their Delray Beach clash will go on to face either Ivo Karlovic or Radu Albot.

In the bottom half of the draw, fellow Australians Jordan Thompson and Bernard Tomic could meet in the second round, should they navigate their opening-round assignments.

Tomic has drawn No.6 seed Andreas Seppi while Thompson – a quarterfinalist at the New York Open last week – takes on Spaniard Marcel Granollers.

Alexei Popyrin came within a win of the main draw, but fell to Darian King at the final hurdle in qualifying. King also beat John-Patrick Smith in the first round, while Alex Bolt fell in straight sets to Japan’s Yosuke Watanuki in the first round.

At the WTA tournament in Dubai, Ajla Tomljanovic fought hard but ultimately went down 6-2 4-6 7-5 to China’s Zheng Saisai in the first round.

In Budapest, Arina Rodionova won her first-round qualifying match 6-0 5-7 6-4 over Anna Kalinskaya, and will face Natalia Vikhlyantseva for a place in the main draw.

Priscilla Hon fell in the first round of qualifying, losing 6-2 6-3 to Georgina Garcia Perez.