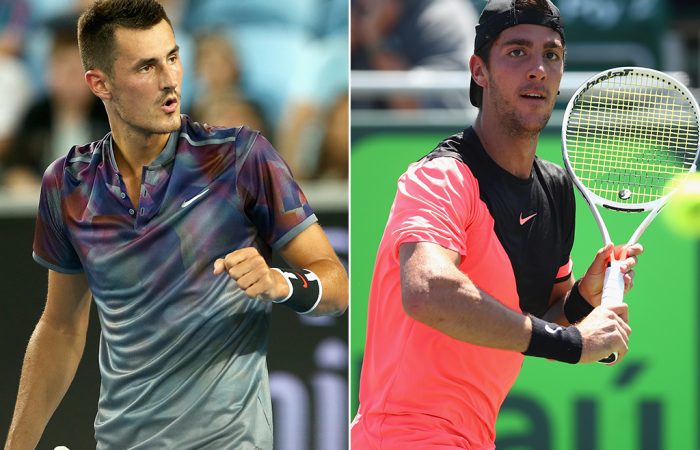 Thanasi Kokkinakis and Bernard Tomic will renew their rivalry when they clash in the first round of US Open qualifying this week.

They are two of 11 Australians taking to the courts this week in New York, chasing a place in the main draw of the year’s final Grand Slam event.

In other news, James Duckworth – playing with a protected ranking – has been elevated to the main draw after Frenchman Jo-Wilfried Tsonga withdrew because of a knee injury.

Alex Bolt has landed in the same segment of the men’s draw as Kokkinakis and Tomic, and should he keep winning he could meet either of his compatriots in the final round.

Bolt opens against Italy’s Stefano Napolitano while Marc Polmans and Max Purcell take on Oscar Otte and Blaz Rola respectively. John-Patrick Smith has drawn No.6 seed Hubert Hurkacz in the first round.

Aiava has drawn former world No.32 Bojana Jovanovski Petrovic while Fourlis takes on Harriet Dart, the Brit who made an impact during the grasscourt season and who recently qualified for the WTA event in Washington DC.

Tomic and Kokkinakis have not met since 2015, a year in which they played three memorable matches.

Kokkinakis won the most recent of those in the second round at Roland Garros, coming back from two-sets-to-love down to beat Tomic 8-6 in the fifth set. That came a couple of months after Tomic stopped Kokkinakis in three tight sets in the fourth round at Indian Wells.

In their first meeting in January 2015, Tomic subdued Kokkinakis 7-6(2) 6-1 in the second round of the Brisbane International.

The winner of their upcoming match in New York faces either 15th seed Yannick Maden or Egypt’s Mohamed Safwat.

Kokkinakis arrives in better form having won 10 of his past 13 matches, while Tomic is on a four-match losing streak. Both withdrew from their most recent tournaments.