With Thanasi Kokkinakis and Alex Bolt qualifying for the ATP hard-court tournament in Atlanta, Australia now has six players in the main draw. 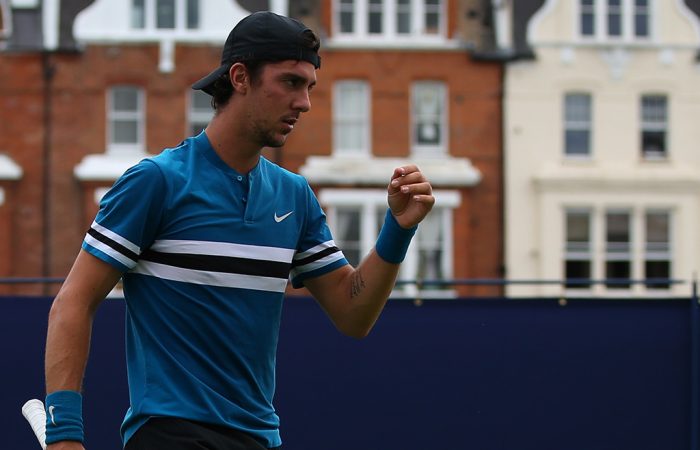 Thanasi Kokkinakis and Alex Bolt won their final-round qualifying matches in Atlanta on Sunday to join four of their countrymen in the main draw of the ATP 250 hard-court event.

Kokkinakis beat Hubert Hurkacz 6-2 7-6(6) to secure his place in the 28-player draw, where he will line up against fellow qualifier Noah Rubin.

Hurkacz ended up being elevated to the main draw as a lucky loser and will now take on 19-year-old Alex De Minaur.

Should De Minaur win, he would progress to a second-round meeting with No.1 seed John Isner, a recent semifinalist at Wimbledon.

Two of the top four seeds in Atlanta are Australian – No.2 Nick Kyrgios and No.4 Matt Ebden. Both receive byes into the second round.

Kyrgios – who won the Atlanta title in 2016 – could play Kokkinakis in the second round; the pair have also received a wildcard to compete together in the doubles draw and will take on another Aussie, John-Patrick Smith, and his American partner Nicholas Monroe.

Ebden awaits the winner of the first-round match between Ivo Karlovic and Donald Young.

A sixth Aussie, James Duckworth, enters the draw using a protected ranking and will meet No.8 seed Ryan Harrison in the opening round.

Across the Atlantic at the ATP 500 tournament in Hamburg, John Millman is the sole Aussie representative and will tackle German Jan-Lennard Struff in round one.

The winner progresses to a likely second-round meeting with top seed Dominic Thiem.