Thanasi Kokkinakis and Alex Bolt will play for a place in the main draw at Wimbledon. They were among eight Australian winners of Day 2 of qualifying. 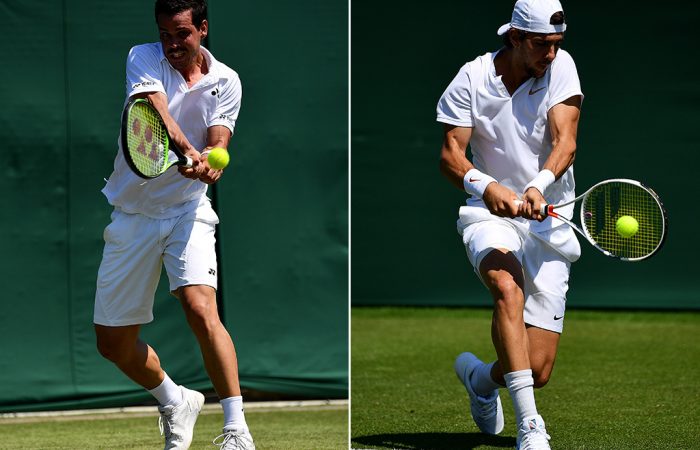 After three-set victories on Monday, Thanasi Kokkinakis and Alex Bolt won far more convincingly on Tuesday to set up an all-Aussie clash in the final round of Wimbledon qualifying.

They were among eight Australian winners on Tuesday at Roehampton; Bernard Tomic, Jason Kubler and John-Patrick Smith made it five-from-five for the Aussie men, while Arina Rodionova, Priscilla Hon and Lizette Cabrera advanced to round two in the women’s event.

Kokkinakis described his first-round win as “ugly” but looked more assured in his second match.

“I just tried to get off to a more intense start. Tried to be a bit sharper with my feet, more than anything. I thought in the second set I dropped my intensity and relied on my serve too much, which luckily was there. But if I can play like I did in the first set consistently, I think I can do well,” Kokkinakis said.

“I’m playing with a little niggle in my quad so I can’t move as well, but (grass) definitely helps with that aspect, there’s not as many long rallies.

It was a business-like victory for @TKokkinakis, who progressed to the final round of @Wimbledon qualifying with a 6-1 6-4 win. Serve on song. #GoAussies pic.twitter.com/MGosfoCynI

“I’ve got a day off (on Wednesday) which I need. Definitely not ready for best of five (laughter). But grass is a leveller. Bolty likes to play some shorts points as well, and he’s absolutely chopping it up so he’s obviously in some good form as well. And he’s been playing a lot more tennis than I have, as well.”

Bolt’s imperious display against Ward sends him through to the final round of Wimbledon qualifying for the second time; he did the same in 2014.

“Overall I feel like I played a really solid tennis match. I’m just in a great spot right now,” the left-hander said.

“We had eight (Australian) guys play qualities this year so there’s a massive contingent here … Obviosuly (Thanasi and I are) both from Adelaide, we’ve had a few training blocks together so we know each other well, we’re really good mates off the court so I’m really looking forward to it – I think it’s going to be a good match.”

Hon, who arrived at Roehampton after reaching the semifinals of the $100,000 ITF grass-court event in Surbiton, beat 15th seed Anhelina Kalinina 6-3 7-6(3).

The world No.164 showcased a booming serve, aggressive return and net-rushing instincts that served her well on the quick lawns. She’s now won five of her seven grass-court matches since falling in the first round of qualifying at Roland Garros.

“I’m confident at the moment,” Hon said. “I haven’t played on grass for like three years, since juniors. Before I came I was a little bit unsure of how — I didn’t even remember if I liked it or not (smiling) but it turned out to fit my game quite well. So it’s been good so far.

“I didn’t serve amazing, I thought. But at points, when I needed it, I think I got it those times. I think it was more (about my) returning, just getting a few break points here and there and slowly getting in her head.” 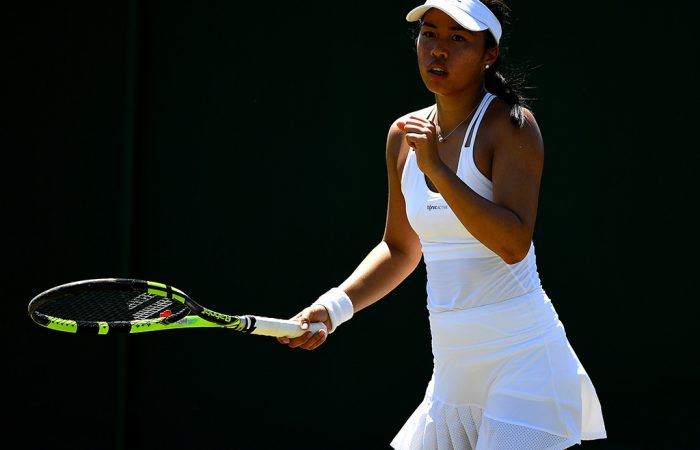 In the second round Hon will face American Jamie Loeb, while Cabrera next faces American Claire Liu after coming from a set and a break down to beat No.17 seed Jana Cepelova 2-6 6-4 6-4.

Cepelova is a former world No.50 who owns wins over Simona Halep and Garbine Muguruza at Wimbledon. Yet she ultimately couldn’t match Cabrera’s consistency and increasingly struggled with the Aussie’s flat, quick groundstrokes.

“I love grass, it’s my favourite surface and I think the last few weeks I’ve been training really well,” said Cabrera. “Just been losing some tight matches. But I think I’ve been learning more and more every year on the grass and I really enjoy it. I think my game is coming along really well.”

Jaimee Fourlis came similarly close to a remarkable comeback, but ultimately went down in three sets to No.19 seed Viktoriya Tomova.

After losing the first set, Fourlis stormed back to win the final four games of the second and recovered from 4-1 down in the third to level proceedings at 4-4. But some costly errors in the final game saw the 18-year-old succumb 6-3 2-6 6-4.

Our top-ranked Aussie woman in qualifying, No.13 seed Arina Rodionova, made it four straight wins at Roehampton with a 6-1 7-6(5) triumph over Romanian Jaqueline Cristian.

Rodionova last year qualified for the main draw at Wimbledon and on Tuesday gritted to a hard-earned victory in the second set. “She’s a very good player, I actually practised with her yesterday and I was pretty impressed; she has pretty big shots,” Rodionova said.

“She’s quite young, so I knew in important moments she might give me a chance … I just tried to basically stay there and be consistent.

“It’s never easy to play first round, especially in the Grand Slams. Everyone is nervous and you really wanna get the win.

“I love grass and I feel good playing on it. Even thought I didn’t have a great (lead-in) before Wimbledon, it makes me feel good about my game, I think it helps me a lot.”

Rodionova will next face another 20-year-old Romanian in Elena-Gabriela Ruse.

As the Tuesday schedule unfolded, the Australian wins kept coming.

Bernard Tomic was a comfortable 6-2 6-4 winner over Tomislav Brkic, his booming serve keeping his opponent off balance and points short.

Bernie Tomic is a big draw @Wimbledon qualifying. And he’s a round two winner, beating Tomislav Brkic 6-2 6-4 to advance to the final round. #GoAussies pic.twitter.com/r5gn0gNVxK

It was the 30th seed’s second straight-sets win in Roehampton this year and sends him through to a final-round meeting with Belgium’s Ruben Bemelmans.

This is the furthest Kubler – who next plays No.8 seed Peter Polansky – has gone in Wimbledon qualifying. In his only previous appearance, he reached the second round in 2015.

John-Patrick Smith then capped a stellar day for the green-and-gold with a 6-3 6-4 win over former world No.19 Marcel Granollers of Spain.

The left-hander from Queensland served and net-rushed his way into a final-round meeting with Michael Mmoh of the United States.

“I played pretty well I thought. Came out pretty aggressive at the start … I didn’t lose serve the whole match and it’s good. Hopefully build on it on Thursday (in the final round),” Smith said.

“I always want to peak before the good events. I didn’t have that many great wins (on grass leading in), had a couple of wins but it was good just kind of getting out here (at Roehampton) and getting used to it, I just wanted to get my feet wet out there and eventually I did.

“I think preparation wise you kind of approach it (five sets in the final round) the same; you don’t want to think about it too much. Hopefully we (the Aussies) can get through.

“Obviously there’s gonna be at least one Australian in.”