Playing on grass courts on which he admits he has little experience, Jason Kubler is two wins away from the main draw at Wimbledon. 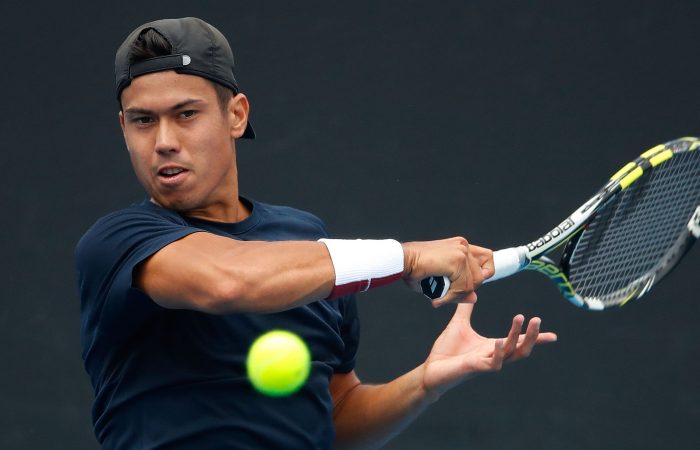 Not long ago, Jason Kubler played exclusively on clay courts.

The Australian suffered chronic knee injuries due to a weakened meniscus, characterised by swelling and pain, which were exacerbated by jarring play on hard courts.

He played just four non-clay events during a seven-year span between September 2010 and September 2017, an approach to scheduling so unusual it even prompted a feature on the Australian to be published in the New York Times.

Yet now, the 25-year-old is a more physically robust player benefiting from extensive knee rehab that has allowed him to play a more complete calendar of events across all surfaces.

And one win from a place in the Wimbledon main draw, he is reaping the rewards.

“I haven’t played on grass a lot so it’s all kind of pretty similar to me at the moment,” a smiling Kubler told tennis.com.au after winning his first-round qualifying match against Arthur De Greef on Monday, referring to how the conditions varied from the previous week where he made the semis at the Ilkley Challenger.

“I had a big week last week … but I feel good. I’m really knuckling down, doing some stuff off the court which I find is helping.

“For the last few weeks I’ve been doing work with (Daniel Buberis) so that’s been really helpful and then been working with Des (Tyson) as well, so it’s been going really well. I can’t really complain about anything.”

Despite his knee troubles, Kubler said that grass has always been a more forgiving surface.

However, he resisted playing the grass-court season for years purely because it was such a brief interlude on the tennis calendar.

“Because I was always playing on clay so much, you wonder do you sacrifice something and not play on clay, which was my best surface, and then play on grass for only four weeks,” he said.

“Now I’m pretty much on a full schedule. I was on hard for all of the summer, even in April. I could have probably gone onto clay a bit sooner, but the funny thing is I was almost worried about how my body would be on clay going back, because it’s been so long. But I had a good three weeks on clay, got that trust back – even though I didn’t do too well I knew I could move around and play on clay, so that was always good.

“And yeah, happy with the grass at the moment.”

Incredibly, this is just the sixth grass-court event that Kubler has ever played in a pro career dating back to 2008.

Yet he thrashed De Greef for the loss of just three games on Monday, and then beat 26th seed Adam Pavlasek 3-6 6-3 12-10 in an epic on Tuesday to reach the final round of Wimbledon qualifying.

Another win against Canada’s Peter Polansky on Thursday would help him inch closer to his career-high ranking of No.136, set back in November 2014.

“It’s tough to say (how my level compares to then), because when I did do that career high it was all on clay,” said Kubler, currently ranked 147th.

“Now I’m doing pretty much all surfaces. And then I’ve still got a few months before I have to start defending points. So that was the difference; when I got the career high that was after a full year of playing.

“Now I’ve got chances to try and beat it, which is good.”