Australian Sam Stosur is set to face Anastasia Pavlyuchenkova in the French Open second round. 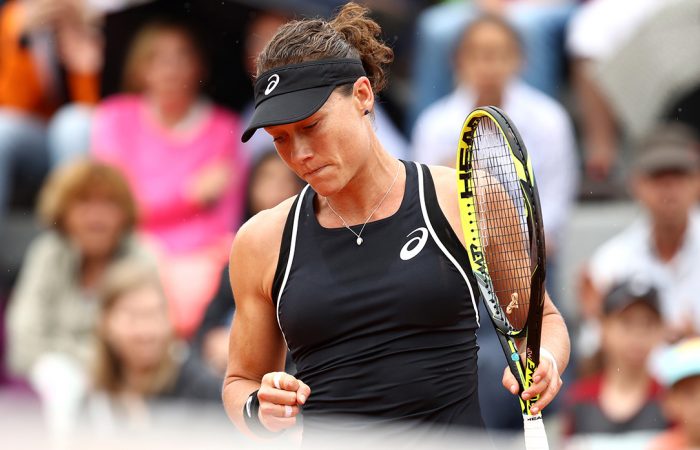 How did Sam Stosur prepare for her important second round singles match at Roland Garros?

She teamed up with her opponent – Anastasia Pavlyuchenkova – for a doubles win.

Stosur and her Russian partner recorded a 6-3 6-4 first round victory over Dutch-Belarusian pair Lesley Kerkhove and Lidziya Marozava last night.

The pair now turn their attention to a singles showdown – one that has extra significance for the 34-year-old Australian.

Stosur needs to defeat the No.30 seed to remain in the world’s top 100. Her ranking is currently No.90 after missing four months of the 2017 season with a stress fracture in her hand, cruelly sustained during a fourth round run at last year’s French Open. With a loss to Pavlyuchenkova, Stosur’s ranking is projected to fall to No.110.

Stosur, who has been a constant in the world’s top 100 for the past decade, knows Pavlyuchenkova is a tough opponent. Their head-to-head is tied at 4-all, but Pavlyuchenkova leads 3-1 on clay. The Russian is one of the few players with a winning record over Stosur on her preferred surface,  but the Queenslander did win their most recent meeting in Madrid earlier this month.

“Obviously we know each other very well,” Stosur told AAP.

“It’s going to be hard. The Madrid match I thought I played very, very well and it was still three sets.

“So she’s a very dangerous player. She can come up with the goods.”

Stosur can take confidence from her incredible record in Paris, where the four-time semifinalist is aiming to reach the third round for a 10th successive year.

“The courts, they’re just so good,” Stosur explained of why she performs so well at Roland Garros.

“Hitting here, everything feels crisp out of the racquet. It’s just got a different feeling here.

“Coming in from Strasbourg, we caught the train again and had a light hit the first day I arrived, but it’s got a different buzz about it.

“All the Slams do but, for me playing here, definitely it’s somewhere where I’ve probably had most of my best wins of my career, so I always love coming back.”