Ash Barty is the new doubles world No.6 after combining with CoCo Vandeweghe to win the tandem title at the Miami Open. 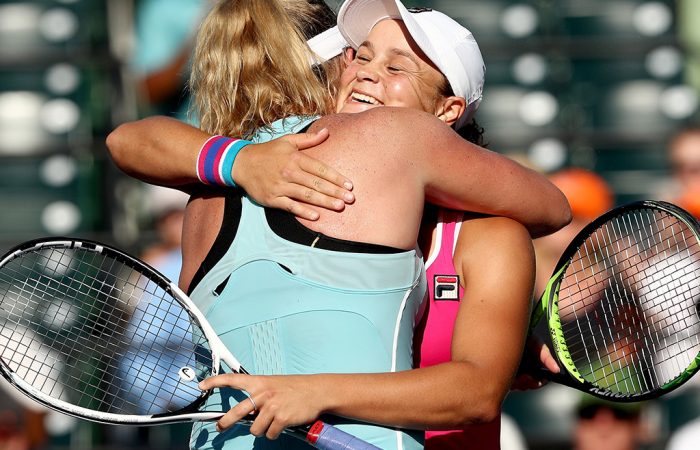 Ash Barty has peaked at a career-high doubles ranking of No.6 after claiming the Miami Open crown with CoCo Vandeweghe.

Playing in just their second tournament together, the victory pushed Barty’s ranking up seven spots.

The Queenslander first cracked the doubles top 10 in January this year, spending three weeks at No.10 before slipping out again.

This week she also rose two places to world No.18 in singles after reaching the fourth round in Miami; she is Australia’s highest-ranked male or female player.

Lower down the list, teenager Jaimee Fourlis rose 12 places to No.311 after reaching the second round of the $60,000 Pro Tour event in Canberra.

She stands to rise even higher after winning a subsequent $25,000 tournament in the same city.

Two other young guns, Alex De Minaur and Marc Polmans, are at this stage of the season in the hunt to qualify for November’s NextGen ATP Finals in Milan.

De Minaur rose seven places to world No.123 after qualifying for the main draw of the Miami Open, while Polmans – the hottest player on the Australian Pro Tour this year – actually fell 19 places to No.216.

The 21-year-old, who stunned Roger Federer en route to the third round in Miami, vaulted 26 places to No.149 and is now the sixth highest-ranked Aussie player in the ATP rankings.

Jason Kubler and Alex Bolt also improved, after each advanced to the semifinals of the recent ATP Challenger event in Qujing, China.