Thanasi Kokkinakis has claimed the biggest victory of his career by defeating the mighty Roger Federer in a third-set tiebreak at the Miami Open. 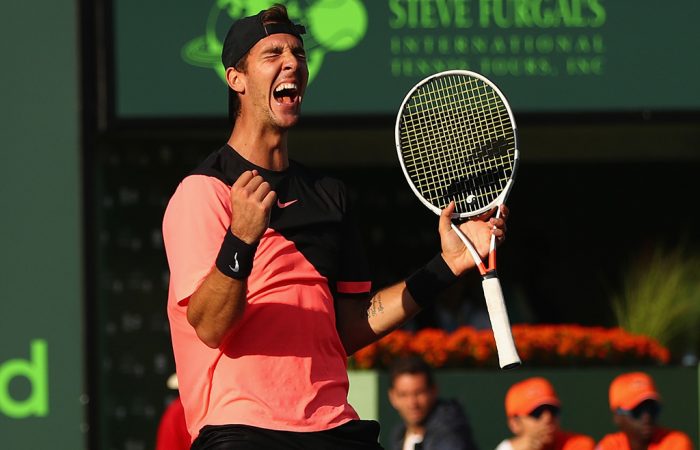 After years of physical issues, Thanasi Kokkinakis turned a corner in a big way on Saturday at the Miami Open.

The Australian, a qualifier into the main draw, stunned world No.1, top seed and defending champion Roger Federer in the second round.

“I know he’s an unbelievable front runner,” Kokkinakis said. “In the second set I kind of used a couple of his errors, I started getting the rallies a little bit more and dictating with my forehand.

“When I feel like I’m playing on my terms, I don’t think there’s too many people who can go with me. So I just need to play my game, play my aggressive tennis and then I can do some good things.

“I was pretty excited (in the tiebreak) … Up 2-0 I really wanted that third point to go 3-0. And then he came up with some good tennis.

“I don’t know man, I just served well … I felt pretty calm considering how big those moments were.”

Thanasi Kokkinakis (175) becomes the lowest-ranked player to beat a world No. 1 in 15 years since Spanish qualifier Francisco Clavet (178) upset Lleyton Hewitt in the second round here. (h/t/ @ATPMediaInfo) #MiamiOpen

With his serve increasingly clicking and his fearsome forehand firing, that single break was all he needed to send the match to a third set.

There, he weathered several storms. Serving at 2-3, Kokkinakis fended off two break points in a 10-minute game to level scores at 3-3. And he trailed 0-30 when serving at 5-6 before escaping to send the final set to a tiebreak.

He skipped out to a 2-0 lead but Federer worked his way back into it; the Australian and the Swiss were locked at 3-3 when they changed ends.

Yet a mini-break to Kokkinakis helped him open a 5-3 lead, and he brought up match point with a big first serve followed by a forehand winner powered into the corner.

Federer’s return into the net on the following point handed Kokkinakis the biggest victory of his career.

Having never before met, Kokkinakis now leads Federer 1-0 in their head-to-head.