Australian Fed Cup captain Alicia Molik believes the choice of a grass surface in the nation's capital presents her team with the best chance of success this weekend against Ukraine. 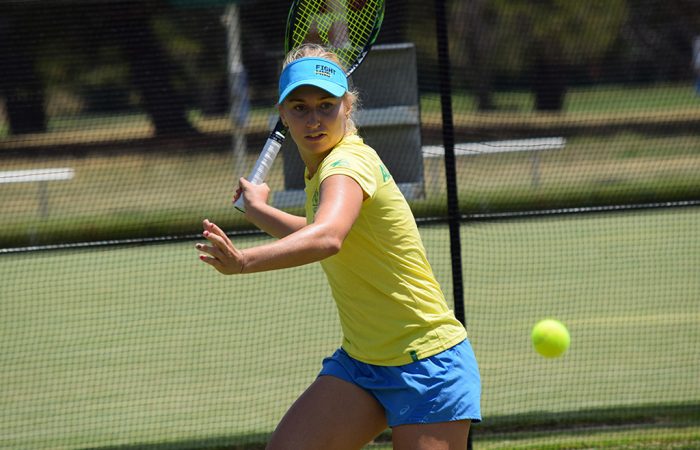 Playing a rare home tie, Australia lines up this weekend against Ukraine to begin its quest for a return to the Fed Cup World Group.

The World Group II first round tie will be staged on grass at the Canberra Tennis Centre, just the second time in its last seven ties that Australia has enjoyed the chance to play at home.

It’s been four years since the green-and-gold squad contested a tie in summery February on home soil; the last three years have delivered trips at this time of year to chilly Germany, Slovakia and Ukraine – all which have had to be staged indoors.

“We finally get to play a Fed Cup tie in summer – we’ve been in snow or ice over the last couple of ties so it’s really exciting that we can be back here in Canberra,” said Alicia Molik, Australia’s Fed Cup captain, on Monday.

“The court has been prepared beautifully. It’s playing incredibly even, the practice courts are quite quick. It’s a really credit to the grounds staff here … the main match court looks fantastic as well. We couldn’t ask for anything more, really.”

The decision to stage a tie on grass may seem unusual for this time of year.

Players have just come off a month of hard court play during the Australian summer swing throughout January, and will next gear up for hardcourt events in the Middle East and the United States.

Then comes the claycourt circuit; grass doesn’t make an appearance on tour until June.

> get your Fed Cup tickets!

But with the Fed Cup comes different rules, and the chance to select a surface on which the Australian squad – comprising Ash Barty, Daria Gavrilova, Casey Dellacqua and Destanee Aiava – has the best chance of success.

The Aussies originally chose grass thinking it would give them the best shot of dethroning an Elina Svitolina-led Ukrainian team. The world No.3 has since decided not to make the trip to Canberra; the headliner is now 15-year-old whiz-kid Marta Kostyuk, who won last week’s Pro Tour tournament in Burnie.

Yet the approach remains the same.

“We chose grass because we feel like it favoured our team,” Molik said. “The Ukraine team have beaten us the last few times – they’re a really difficult team.

“We have a lot of experience on grass, Ash loves it, Dasha is very accomplished on this surface too. We all play really attacking games, the Australian Fed Cup team. So it’s a surface that really works for us and I know our team adjusts quickly to it too.

“It’s about making ourselves stronger (than the Ukrainians) on the weekend.”

It’s the first time Canberra will host a Fed Cup tie since 1998, when Australia beat Argentina 5-0 at the AIS Arena on an indoor carpet court.

Molik said it was important to stage elite-level tennis events such as this beyond the major cities of Australia, which already have their share of notable tournaments.

“With the Australian Open, a lot of the summer is based around Melbourne so for us it’s really important that we give our supporters and the public an opportunity to watch our best team live in various places around Australia.”

A win over the Ukraine – Australia trails the head-to-head 1-3 – would send the team into a World Group Play-off tie in April.

A win there would return the green-and-gold to the elite eight-nation World Group in 2019.

“We want to be back in the top eight nations in the world,” Molik said.

“If you look at the calibre of the players that we have, Ash and Dasha both around 20 in the world, we deserve to be there in the top eight, there’s no question about that.

“We should be winning this competition over the next couple of years – we’re good enough to.”