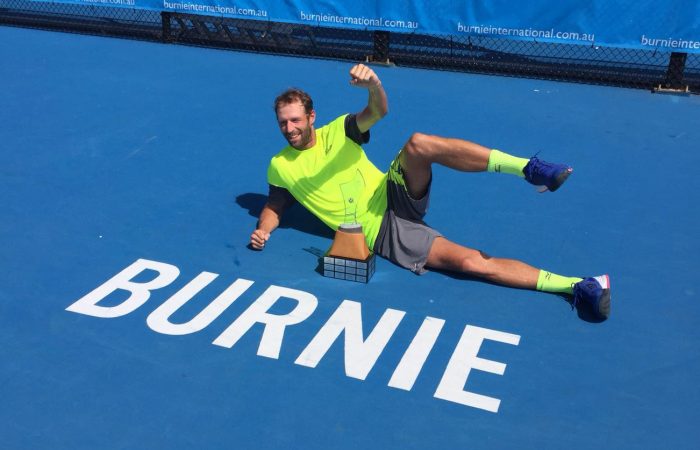 At 37, Robert has become the second-oldest champion on the ATP Challenger Tour after Dick Norman, who won the Mexico City title in 2009 aged 38.

“I was solid the whole week,” Robert said. “I had a tough match in the first round against a qualifier and then again in the next match but after that I began to play better and better and found my rhythm.

“It’s always a pleasure to play in Australia, I like the atmosphere, I feel at home here.”

Robert, a former world No.50 and seeded fifth here, found another gear in the final, simply outclassing his younger opponent – who defeated in-form Queenslander Jason Kubler in the semifinal – in just over an hour.

“The final is always a bit special and you can feel some pressure,” said Robert. “I feel like after playing a final just a few months ago in Japan I know how to handle this. For him, it was the first tournament after a long break with injury, so it was not that easy.

“I was playing great, not many mistakes, and serving good, so I put him under pressure all the time.”

The 37-year-old said that he had expected his late-night rain-delayed semifinal to have some toll on his body, but it wasn’t the case.

“Yesterday was tough and I was a bit worried, but when I woke up this morning, I was feeling good,” he said. “I ran very well in the final, it was a surprise actually, but now I’m just looking forward to next week (in Launceston) to see if I can keep the same shape.”

The men’s doubles final was won by Spanish brothers Gerard and Marcel Granollers, who proved too strong for their American opponents Evan King and Max Schnur, taking the title 7-6(8) 6-2.

In the women’s event, 15-year old Ukrainian Marta Kostyuk continued her momentum following her record-breaking third round appearance at the Australian Open last month, taking down top seed Viktorija Golubic of Switzerland 6-4 6-3 to claim her maiden $60,000 ITF Pro Circuit title. Kostyuk now heads to Canberra to take on the Australians in their upcoming Fed Cup tie.