Success for WA at the National Seniors Tennis Championships 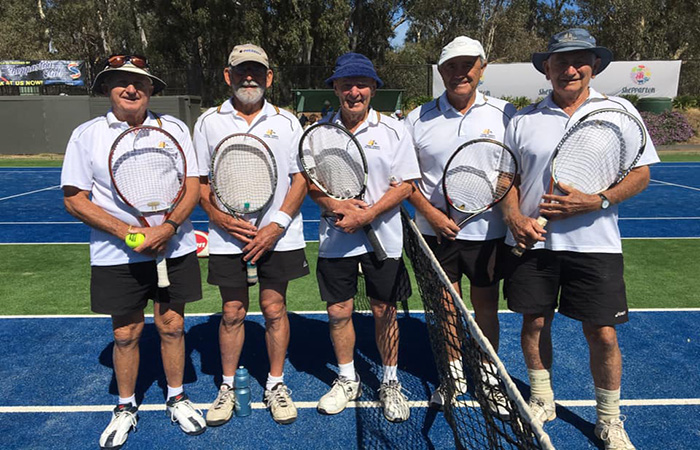 The victorious 80 and over Men’s team, with players Don Scott, George Kitson, Bill Hawthorn, Arnold Jones, Ken Harris and the team’s Captain Alan Morcombe, beat NSW in the Final after a successful campaign throughout the tournament.

The annual Senior Tennis Championships holds both a Teams Carnival and Individual Championships schedule, attracting over 1,000 tennis players and supporters from across the country.

The 2020 National Seniors Tennis Championships will be held in the State’s South West, with Busselton and Bunbury Tennis Clubs set to co-host the prestigious event. The majority of games will be played at Busselton Tennis Clubs new $4.2m venue, set to open ahead of the event in October.

Competing in this year’s 65 and over team, Jenny Teakle said her team’s result was secondary to the experience and benefits of playing tennis.

“I grew up playing tennis and have competed in the National Seniors Tennis Championships since the early 2000’s. I’ve travelled Australia and made the dearest of friends in doing so. My favourite part of every event is meeting up with people who you haven’t seen in such a long time,” said Mrs Teakle.

Likewise, 81 year old Geraldton tennis stalwart Ken Harris, who has just competed in his 28th National Championship, and was a part of the winning 80+ team, said that his lifelong involvement with the sport has taken him around the world, even competing in a Wimbledon qualifying match at age 19. Most importantly though, Harris says, has been in the sport’s impact on his family.

“I’ve been lucky enough to travel the World playing tennis, but it’s the impact at home that’s most important. Tennis is a big part of our family’s life, we all share in a common interest that we love,” said Mr. Harris.

And if a recent study published in September 2018 by Mayo Clinic proceedings, which identified tennis as the number one activity for increasing life expectancy is anything to go by, then it’s time to dust off the Dunlop’s, whip out the Wilson, and get back out on the court!

The study, which followed 8577 participants over 25 years, found that the life expectancy of tennis players was increased by 9.7 years, significantly outperforming activities such as running, cycling, swimming, soccer and health club activities.

The observational study, which began in 1991, analysed the distribution and determinants of health and disease across defined population groups, concluding that sports with increased social interaction, proved to correlate positively with increased longevity. Not surprising then, that tennis aced the study as a standout.

“Even after the necessary adjustments were made for all-cause mortality, including considerations for age, sex, education, income, diabetes and drinking and smoking habits, tennis still came out on top,” said Dr. Schnohr.

“The most significant factor highlighted in the study is the relevance of social connectedness that can be found alongside exercise,” said Sherrington.

Adding to the conversation was 87 year old tennis player, Marie Burns, who supported the study’s findings, noting the significant impact that tennis has played throughout her life.

“I’ve played with the same group of ladies for some 45 years now, we’re all in our 80’s and it’s the companionship that we value most. We play every Wednesday, it means we’re getting out of the house. We discuss current issues, it keeps us in tune and connected with each other and the word,” said Mrs. Burns.

The Copenhagen study isn’t alone in its findings either, with supportive evidence proving that good interpersonal connections brings twice as much protection against early mortality. Above all, what proves most important, is regular participation in interactive sports that provide both exercise and social connectedness. Belonging to a group or team that meets regularly, is repeatedly proven to contribute positively to a sense of well-being with significant impacts long-term health.

The National Seniors Tennis Championships Teams Carnival is a doubles competition for women and men, with age group divisions ranging from 35 to over 80 years old. The prestigious Australian Seniors Championships follows the Teams Carnival. This event is an ITF (Grade A) tournament, offering singles, doubles and mixed doubles events in 5 year age brackets from the age of 35 years.

For more information about the ABC Health Report, click here.