Ajla Tomljanovic and Nick Kyrgios are among 10 Australian players in action on day 10 at Wimbledon 2022. 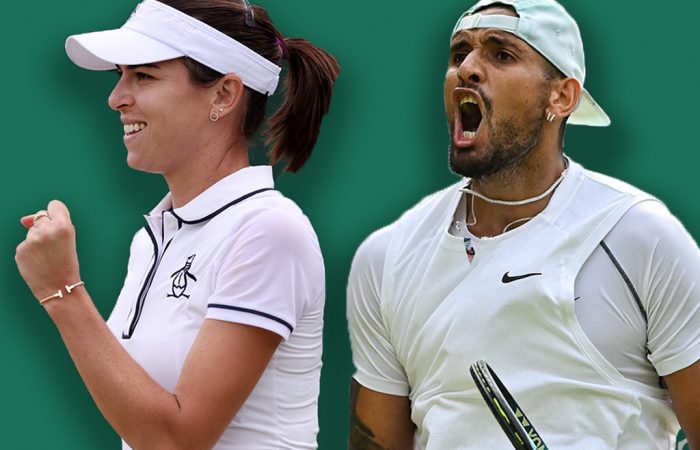 As Ajla Tomljanovic and Nick Kyrgios each prepare to contest their second Wimbledon quarterfinals, both can appreciate important lessons from their first experiences.

“It was so quick,” Tomljanovic reflected. “I played someone that was playing unbelievable tennis. For her, being on Centre Court, was like being in her backyard. For me, it was a huge occasion.”

This year, a more prepared Tomljanovic faces world No.23 Elena Rybakina in the final eight.

“I’m in a different spot, for sure,” Tomljanovic said. “Obviously Elena is a great player. Whoever’s in the quarters is doing great. I think it’s definitely a little bit of a different match-up for me … I think I have a better shot.”

Kyrgios was a fearless 19-year-old wildcard when he advanced to the Wimbledon 2014 quarterfinals.

He is now 27 and has a greater appreciation for the opportunity, having not progressed to a major quarterfinal in more than seven years.

“I look at it as a big opportunity,” said world No.40 Kyrgios.

Tomljanovic and Kyrgios are among 10 Australians scheduled to compete on day 10 at the All England Club.

Ajla Tomljanovic (AUS) v [17] Elena Rybakina (KAZ)
Ladies’ singles, quarterfinals, No.1 Court, first match (from 10pm AEST)
Tomljanovic’s self-belief is at an all-time high. The world No.44 has eliminated two top-20 seeds to reach her second consecutive Wimbledon quarterfinal and now has her sights set on beating 17th seed Rybakina. The 23-year-old from Kazakhstan is contesting her second major quarterfinal, having previously made the final eight at Roland Garros in 2021. “I’m the underdog,” admitted Tomljanovic. “(But) I don’t mind that … I’m a big fighter.”
Head-to-head record: Rybakina leads 1-0
Last meeting: Rybakina won 6-4 6-0 (Madrid, May 2021)

Nick Kyrgios (AUS) v Cristian Garin (CHI)
Gentlemen’s singles, quarterfinals, No.1 Court, second match
Kyrgios has powered into his third career Grand Slam quarterfinal – and first since Australian Open 2015. The 27-year-old Aussie is in impressive form, winning 11 of his 13 grass-court matches this season. Yet the world No.40 is wary of Garin, a 26-year-old from Chile who knocked out Australia’s Alex de Minaur in a five-set fourth-round battle. “Garin is obviously playing great tennis,” said Kyrgios of the former world No.17.
Head-to-head record: First meeting

[7] John Peers (AUS)/Filip Polasek (SVK) v [14] Matt Ebden (AUS)/Max Purcell (AUS)
Gentlemen’s doubles, quarterfinals, No.3 Court, first match (from 8pm AEST)
World No.16 Peers has progressed to fifth Wimbledon quarterfinal. The 33-year-old is now hoping to reach his third semifinal at the All England Club and first since 2017. The 34-year-old Ebden and 24-year-old Purcell are enjoying a career-best run at the tournament and contesting their first quarterfinal. This is the first meeting between these two teams.

Sam Stosur (AUS)/Matt Ebden (AUS) v Coco Gauff (USA)/Jack Sock (USA)
Mixed doubles, semifinals, No.3 Court, third match
World No.11 Stosur is contesting her third Wimbledon mixed doubles semifinal and first since 2014, while this is world No.31 Ebden’s best-ever result at the tournament. The Australian Open 2021 finalists face the powerful American combination of world No.5 Gauff and world No.53 Sock.

Edward Winter (AUS)/Jack Loutit (NZL) v Joao Fonseca (BRA)/Juan Carlos Prado Angelo (BOL)
Boys’ doubles, second round, Court 8, third match
Winter, a 17-year-old South Australian with an ITF world junior ranking of No.89, is teaming with Loutit, an 18-year-old from New Zealand ranked No.80. Their second-round opponents – Fonseca, a 15-year-old Brazilian ranked No.55, and Prado Angelo, a 17-year-old Bolivian ranked No.50 – eliminated the No.2 seeds in the opening round.

Mark Philippoussis (AUS)/Tommy Haas (GER) v Marcos Baghdatis (CYP)/Xavier Malisse (BEL)
Gentlemen’s invitational doubles, Court TBC (not before 2am AEST)
With his booming serve, Philippoussis enjoyed much success at Wimbledon during his professional career. The 2003 singles finalist made his 10th and final appearance in 2006.