Thanasi Kokkinakis, who faces top-seeded Novak Djokovic in a second-round singles clash, is one of nine Australians scheduled to compete on day three at Wimbledon 2022. 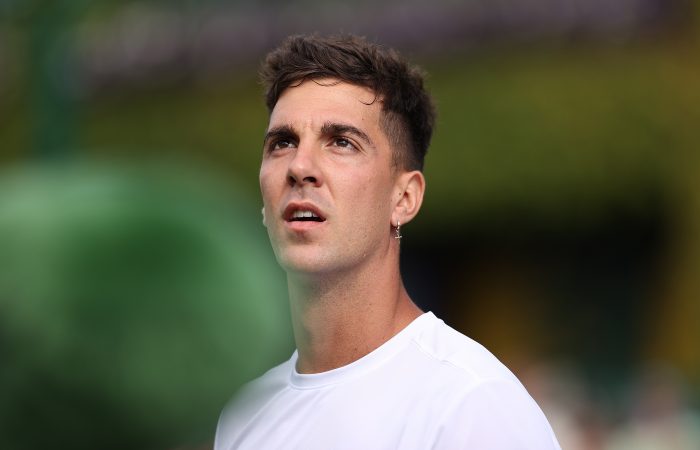 “It’s obviously going to be a really tough challenge,” Kokkinakis said ahead of their second-round meeting at Centre Court. “I’m probably not the favourite, let’s put it that way.”

Djokovic has only lost to an unseeded opponent at Wimbledon once in his record-breaking career, beaten by former world No.1 Marat Safin in the 2008 second round.

Yet Kokkinakis is excited for the opportunity to try and snap Djokovic’s imposing 47-match winning streak against unseeded opponents at Grand Slam level.

“If you do get the opportunity to step up against one of the greatest of all time, it’s a dream really,” Kokkinakis said. “You want to play on those from those big courts and that big atmosphere.

Kokkinakis, who will feature in both singles and doubles, is one of nine Australians scheduled to compete on day three at the All England Club.

Thanasi Kokkinakis (AUS) v [1] Novak Djokovic (POL)
Gentlemen’s singles, second round, Centre Court, first match (from 10.30pm AEST)
World No.79 Kokkinakis has progressed to Wimbledon’s second round for the first time in his career, where he’ll face six-time champion Djokovic. “(I) can’t wait for the opportunity,” said the 26-year-old from Adelaide. The resurgent Kokkinakis is seeking to record his first top-10 win at Grand Slam level. World No.3 Djokovic is currently on a 22-match winning streak at the tournament, where the 35-year-old also owns a 15-1 career record in second-round matches.
Head-to-head record: Djokovic leads 1-0
Last meeting: Djokovic won 6-4 6-4 6-4 (Roland Garros, May 2015)

John-Patrick Smith (AUS)/Pedro Martinez (ESP) v Andrey Golubev (KAZ)/Denys Molchanov (UKR)
Gentlemen’s doubles, first round, Court 5, first match (from 8pm AEST)
The 33-year-old Smith has been in solid form on grass, recently reaching an ATP Challenger final to return to the top 100. The world No.99, who is making his seventh Wimbledon doubles appearance, is teaming with 25-year-old Spaniard Martinez this fortnight. The duo, who have never previously played together, face world No.39 Golubev and world No.97 Molchanov in the first round.

James Duckworth (AUS)/Marcos Giron (USA) v Aleksandr Nedovyesov (KAZ)/Aisam-Ul-Haq Qureshi (PAK)
Gentlemen’s doubles, first round, Court 5, second match
Following a four-set first-round loss to former world No.1 Andy Murray in singles, Duckworth turns his attention to doubles. The 30-year-old Aussie is making his first appearance in a Wimbledon doubles draw. His partner Giron, a 28-year-old American, is also making his doubles debut at the tournament. They face the experienced combination of world No.60 Nedovysevov and world No.54 Qureshi.

Luke Saville (AUS)/Matwe Middelkoop (NED) v Jordan Thompson (AUS)/Joao Sousa (POR)
Gentlemen’s doubles, first round, Court 6, third match
World No.63 Saville and world No.167 Thompson teamed up at Roland Garros last month – but at Wimbledon, are facing-off in the first round for the second year in a row. Saville, making his third doubles appearance at the All England Club, and Dutch partner Middelkoop carry momentum into this match after reaching the Eastbourne final last week. Thompson, making his fifth Wimbledon doubles appearance, is teaming up with Portugal’s Sousa for the first time this season.

[7] John Peers (AUS)/Filip Polasek (SVK) v Mackenzie McDonald (USA)/Botic van de Zandschulp (NED)
Gentlemen’s doubles, first round, Court 8, fourth match
World No.16 Peers is making his 10th appearance at Wimbledon and looking to better a 2015 finals effort. The 33-year-old Peers and Slovak partner Polasek started the season strongly, winning their second team title in Sydney. However, the seventh-seeded duo have been struggling recently and scored only a single win from their past eight matches together.

[10] Thanasi Kokkinakis (AUS)/Nick Kyrgios (AUS) v Aljaz Bedene (SLO)/Soonwoo Kwon (KOR)
Gentlemen’s doubles, first round, Court 17, fourth match
The Special Ks are teaming up at Wimbledon for the first time since scooping the boys’ doubles title in 2013. The reigning Australian Open champions have won 10 of their 12 matches together this season, propelling Kokkinakis to world No.27 and Kyrgios to world No.29 in the rankings. This is Kyrgios’ first appearance in a Wimbledon gentlemen’s doubles draw and Kokkinakis’ third (and first since 2017).