Australia's Nick Kyrgios has recorded his first top-10 win on grass in almost seven years at an ATP 500 tournament in Germany. 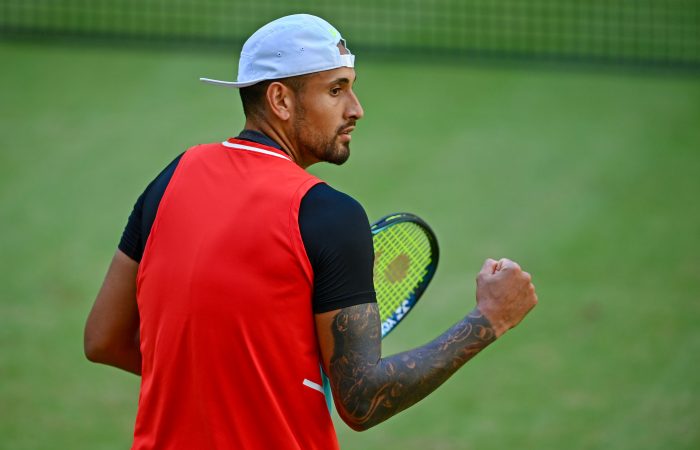 Nick Kyrgios has proved he can match it with the world’s best players on grass, knocking out world No.6 Stefanos Tsitsipas in a second-round battle at Halle.

This match had it ALL 🤩

It is world No.65 Kyrgios’ third top-10 win of the season – and his first on grass since beating then world No.8 Milos Raonic at Wimbledon in 2015.

This moves Kyrgios, a wildcard entry this week, into a quarterfinal showdown with world No.19 Pablo Carreno Busta of Spain.

“I want to keep having these big wins on the best courts in the world,” Kyrgios said.

Alex de Minaur has been beaten in the second round at an ATP 500 tournament at Queen’s Club in London.

World No.21 De Minaur had his chances – but only managed to convert two of the 10 break point opportunities he earned in the two-hour and 15-minute encounter.

De Minaur now turns his attention to doubles, where he is through to the quarterfinals alongside British partner Cameron Norrie.

World No.6 Maria Sakkari has ended the winning run of Australian qualifier Daria Saville at a WTA 500 tournament in Berlin.

The second-seeded Greek recorded a 6-1 7-5 victory against Saville in second-round action.

In doubles, Storm Sanders and Ellen Perez are set to face-off in the quarterfinals.

While Perez and American partner Nicole Melichar-Martinez needed only 61 minutes to beat Anna Kalinskaya and world No.12 Desirae Krawczyk.

Sam Stosur and Latisha Chan have booked their spot in the Birmingham doubles semifinals.

The two former world No.1s scored a 6-4 3-6 [10-7] victory against fourth-seeded combination Shuko Aoyama and Hao-Ching Chan in the quarterfinals.

This propels 38-year-old Stosur into her first grass-court women’s doubles semifinal since 2011, when she made the Wimbledon final alongside German Sabine Lisicki.