Australia's Nick Kyrgios is through to his first ATP semifinal at a grass-court event in almost four years. 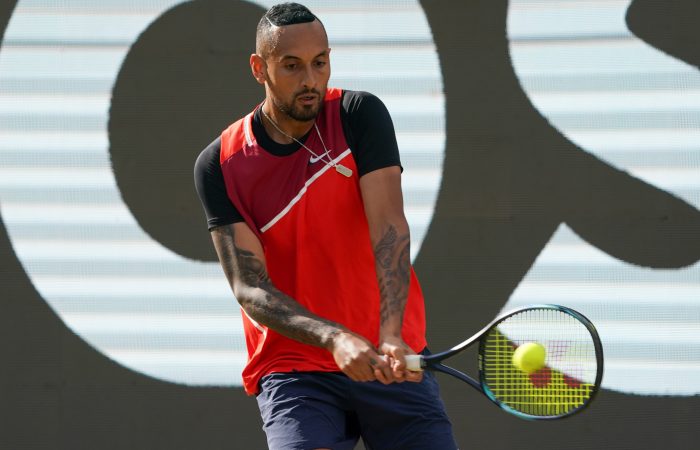 Nick Kyrgios has set a semifinal showdown with former world No.1 Andy Murray at an ATP 250 tournament in Stuttgart.

The 27-year-old Australian moved into the final four after Hungarian Marton Fucsovics retired during the second set of their quarterfinal clash.

Kyrgios was leading 7-6(3) 3-0 when world No.55 Fucsovics conceded the match due to a lower back injury.

This propels Kyrgios into his second ATP semifinal of the season – and first on grass in almost four years.

Murray awaits after eliminating top seed Stefanos Tsitsipas in the quarterfinals. It was 35-year-old Murray’s first top-five win on grass since beating world No.1 Novak Djokovic in the Wimbledon 2013 final.

Murray owns a 5-1 win-loss record against world No.78 Kyrgios, however the Australian did win their most recent meeting on grass in 2018.

Kyrgios is looking to advance to his first ATP singles final since his title-winning run at Washington in August 2019.

Ajla Tomljanovic’s winning run at a WTA 250 tournament at Nottingham has come to an end, losing her quarterfinal clash against Switzerland’s Viktorija Golubic.

There was better news for Jordan Thompson and Alexei Popyrin in an ATP Challenger event being held concurrently at the venue, with both advancing to the semifinals.

At least one Australian is guaranteed to feature in the men’s singles final, with world No.74 Thompson to now face world No.100 Popyrin for a place in the title match.

After rain impacted the schedule earlier in the tournament, Ellen Perez made up for lost time by scoring three doubles wins in s-Hertogenbosch today.

Perez and Slovenian partner Tamara Zidansek have now booked their place in the women’s doubles final at the WTA 250 tournament.

It is the ninth career WTA doubles final for 26-year-old Perez – and her first this season.

Matt Ebden and Max Purcell are through to the men’s doubles semifinals, sealing their spot with a come-from-behind quarterfinal victory against Monaco’s Hugo Nys and France’s Edouard Roger-Vasselin.

Heath Davidson has been knocked out of the quad wheelchair doubles competition at the French Riviera Open.

Davidson now turns his attention to the quad wheelchair singles semifinals at the clay-court event, where he’ll face world No.2 Schroder.