Australian James Duckworth is through to the second round in the men's singles competition at the Tokyo 2020 Olympic Games. 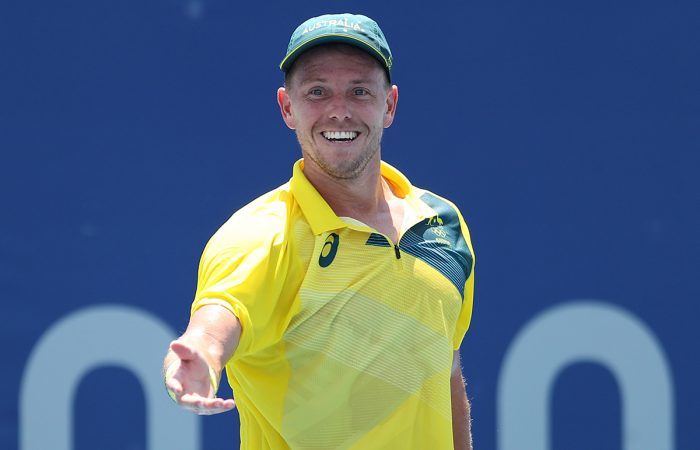 James Duckworth has made a dream Olympic Games debut, advancing to the second round in Tokyo.

World No.246 Klein made a strong start and established a 7-5 2-0 lead. The 23-year-old hit 12 winners to Duckworth’s three in the opening set, heaping the pressure on his higher-ranked opponent.

But Duckworth’s experience proved telling, with the world No.77 fighting back to win six of the next seven games and level the match at one-set apiece.

The Brisbane-based Duckworth handled the humid conditions best in the deciding set to clinch victory after two hours and 18 minutes on court. Under immense pressure, Duckworth impressively lost only five points on serve in the final set.

“I felt like I was the better player in the third set,” Duckworth said. “I couldn’t quite sneak a break, all I was thinking was trying to take it one point at a time, make as many returns as possible and then on my serve land first serves, which I was able to do. I was able to get off to a good start in the tiebreak, serve well and hang on in the end.”

“It’s exciting to win for my country,” Duckworth said. “You don’t play with Australia on your back too often, and to get a win in this event is really cool.”

Today’s victory sees Duckworth join a small group of 11 Australian men to win an Olympic Games singles match since tennis was reintroduced as an official Olympic sport in 1988.

With John Millman and Max Purcell also advancing to the second round in Tokyo, it marks the best effort by an Australian men’s singles tennis team at the Olympics since 1996.

Purcell made the most of an alternate spot in the draw, upsetting ninth-seeded Canadian Felix Auger-Aliassime today.

Luke Saville was a late addition to the draw too, following the withdrawal of Hungary’s Marton Fucsovics. However, seventh-seeded Hubert Hurkacz of Poland proved too strong in their first-round clash and recorded a 6-2 6-4 victory.

The world No.48 recorded a 6-4 6-3 win against the Wimbledon champion. It is the first time in modern Olympic history that the top-seeded woman has lost in the opening round.

Barty now turns her attention to doubles, where she has progressed to the second round alongside Storm Sanders.