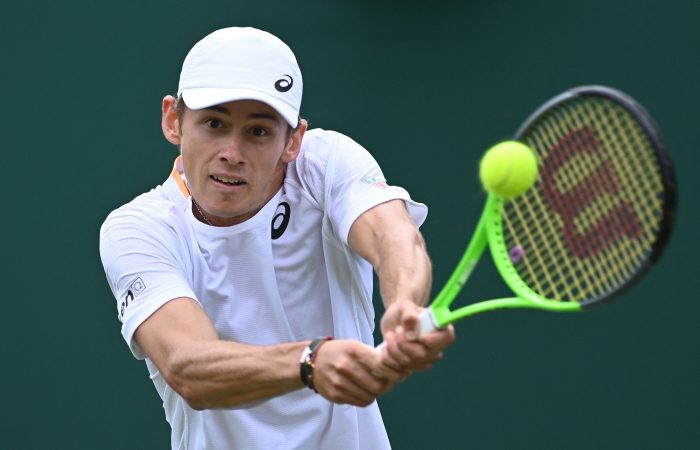 After claiming his fifth career ATP singles title in Eastbourne last week, the 22-year-old entered the tournament at a career-high ranking of world No.15. With eight grass-court wins in the past month, De Minaur’s own expectations were high too.

He could not maintain that momentum at the All England Club today, however, with world No.50 Sebastian Korda recording a 6-3 6-4 6-7(5) 7-6(5) victory in their first-round clash.

“I’d had a hell of a grass-court season but it’s a bittersweet ending,” De Minaur said. “Once I have some time, I’m sure I’ll be able to look back and be happy with my efforts over the season but this is the week that I wanted to go deep, and it’s a shame.”

Korda made a blistering start in their Court 17 showdown, with his depth and power helping him to overwhelm the No.15-seeded Australian and race to a 5-2 lead in the opening set.

The tenacious De Minaur saved seven set points on his serve in the eighth game. But there was no stopping 20-year-old Korda, with the former world No.1 junior losing only six points on serve throughout the first set.

The poised Korda edged ahead again in the second set, breaking De Minaur’s serve in the seventh game. It was enough to help the 196-centimetre American, whose father is Australian Open 1998 champion Petr Korda, take a two-sets-to-love lead.

Aiming to recover from a two-set deficit for the first time in his career, De Minaur tried to lift his intensity and wrest back some control. He earned two break point opportunities on Korda’s serve in the fourth game of the third set, but was unable to convert.

When the third set extended to a tiebreak, De Minaur’s experience proved telling. From the brink of a straight-sets exit, De Minaur forced the match into a fourth set.

Korda, making his Wimbledon main draw debut, proved to have too many weapons. He broke De Minaur’s serve in the fourth game of the fourth set to move ahead 3-1.

The spirited Australian broke back immediately, heaping the pressure on his younger opponent again as he tried to close out the biggest Grand Slam win of his career.

With neither player able to maintain any momentum, it was Korda who remained calm under pressure in a fourth-set tiebreak. He sealed victory after three hours and 24 minutes on court, finishing the match with 44 winners to De Minaur’s 27.

“It is pretty devastating,” conceded De Minaur after the loss.

The former world No.4 put up an impressive fight. After dropping the first set in 25 minutes, the 37-year-old Stosur saved three match points while serving at 4-5 in the second. With confidence growing, she consolidated the break and went on to force a deciding set.

While each player fired a pair of aces and amassed a near identical number of winners (Rogers with 22 and Stosur 21), the American recorded only 23 unforced errors to a costly 41 from Stosur.

There was better news for Ash Barty, with the world No.1 surviving a three-set test against Carla Suarez Navarro in the opening round. While Alex Bolt and Marc Polmans both recorded their first main draw wins at Wimbledon.