Alex de Minaur wins an all-Australian second-round battle to move into the quarterfinals of an ATP 500 tournament in London this week. 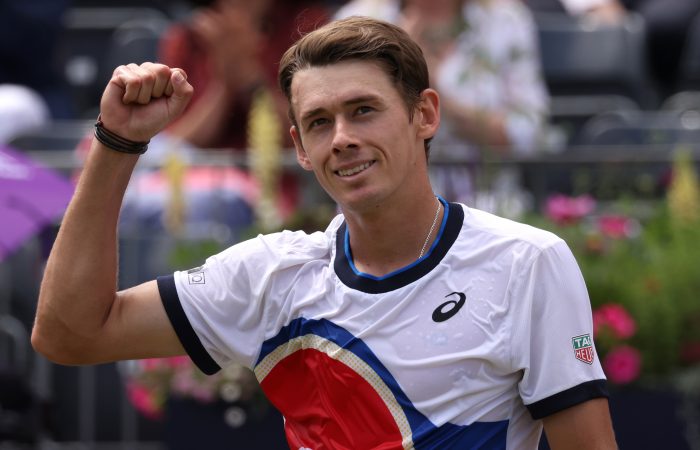 Alex de Minaur is through to a second consecutive ATP quarterfinal – and for the second week in a row, he has defeated a fellow Aussie to reach that stage.

De Minaur, who eliminated Jordan Thompson in the second round in Stuttgart last week, added John Millman to his list of latest victims at Queen’s Club in London.

“It’s never easy,” De Minaur said of facing another Australian. “I’m very close to Johnny, so I want him to do as well as possible and would have loved for him to be on the other side of the draw and go deep.”

The fourth-seeded De Minaur scored a 6-1 6-3 victory against Millman, losing only 15 points on serve in the 63-minute second-round match.

“I played a very good match today. A level that I think I haven’t brought in a while, so I’m very happy with that,” De Minaur said.

Demon does it 😈 @alexdeminaur powers past John Millman and into the last eight at Queen's, 6-1 6-3. #cinchChampionships pic.twitter.com/trxO7T5cSW

John Peers and his American partner Reilly Opelka also advanced to the doubles quarterfinals, as did Max Purcell who is playing with Russian Aslan Karatsev this week.

Jordan Thompson’s winning run at an ATP 500 tournament in Halle is over, exiting both the singles and doubles competitions.

Ajla Tomljanovic has lost in the second round at a WTA 250 tournament in Birmingham.

The 28-year-old Australian, who scored her first career top-20 win on grass in the opening round, lost a three-set battle to a resurgent Coco Vandeweghe.

“I’m definitely not happy with a week when I get knocked out in the second round,” said Tomljanovic. “But at the same time, my end goal is Wimbledon and this is a good stepping stone to getting there. When I look at the quality of the matches I played, I’m pretty happy.

“I hope I can have a good run at Wimbledon. A lot of people think my game suits this surface well and I will say it’s time I started believing it as well. After these two matches, I really think maybe this year is the best chance I have so far because I’m better mentally, I’m striking the ball the best I ever have going into Wimbledon. So that all gives me confidence.”