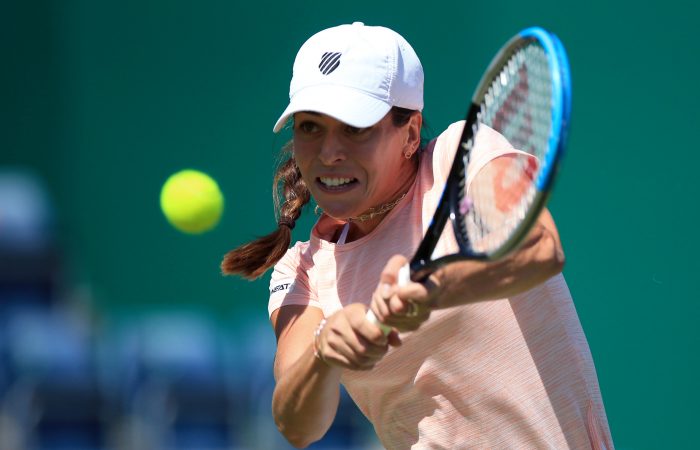 Ajla Tomljanovic has scored her biggest career win on grass to move into the second round of a WTA 250 tournament in Birmingham.

“I didn’t expect to play that well,” Tomljanovic said. “I came out and thought I’d just do my best. I was actually just happy that it was a great match, but with the outcome I’m even happier.

“This is a really big confidence-boosting win for me, because I know Elise never gives you the match. She really made me work for it the whole match.”

It is Tomljanovic’s first ever top-20 win on grass and the ninth of her career across all surfaces. The world No.72’s last top-20 win had been in February 2020.

Tomljanovic now plays former world No.9 Coco Vandeweghe in the second round. The American, currently ranked No.203, is returning from a hand injury.

Alex de Minaur has set a second-round showdown with Davis Cup team-mate John Millman at an ATP 500 tournament at Queen’s Club in London.

The fourth-seeded De Minaur battled back to defeat Serbia’s Laslo Djere 3-6 6-3 6-4 in the first round.

De Minaur holds a 2-0 win-loss record against Millman, having won both of their previous tour-level matches on hard court in straight sets.

The 25-year-old Australian impressed in his first career meeting against a top 15-ranked opponent, holding two set points in the first set and another three in the second set. But world No.14 Shapovalov proved clutch under pressure, serving 20 aces in his one hour and 38 minute victory.

Brit Dan Evans proved too strong for Alexei Popyrin in their first-round meeting, scoring a 6-4 6-4 win.

John Peers, who is teaming with American Reilly Opelka this week, and Max Purcell, who is playing with Russia’s Aslan Karatsev, both scored opening-round wins in doubles action.

Luke Saville and Jordan Thompson have scored an opening-round doubles win at an ATP 500 tournament in Halle, with the all-Aussie combination defeating Croatian Franko Skugor and Denmark’s Frederik Nielsen 6-3 6-4.

Nielsen is a former Wimbledon doubles champion, making this an impressive win for the Aussies. They next face sixth-seeded Belgian duo Sander Gille and Joran Vliegen.