De Minaur out of Stuttgart

Alex de Minaur's run at an ATP 250 tournament in Germany is over, with the Australian beaten in a close quarterfinal. 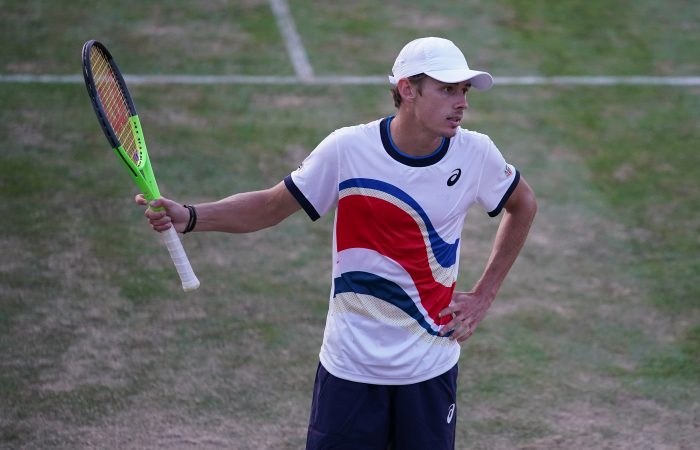 Alex de Minaur got within one point of earning a place in the semifinals at an ATP 250 tournament in Stuttgart.

The 22-year-old Australian held a match point late in the third set of his quarterfinal clash with Austrian wildcard Jurij Rodionov, but was unable to convert.

De Minaur now turns his attention to next week’s ATP 500 tournament at Queen’s Club in London, where he’ll continue his grass-court preparations ahead of Wimbledon.

An Australian will win the doubles title at the ATP Challenger event in Nottingham this week.

They will play Australia’s Matt Reid and Brit Ken Skupski for the title, who earned their final spot with a 7-5 6-3 win against France’s Antoine Hoang and India’s Ramkumar Ramanathan.

Ebden and Smith are trying to win their first title of the season, while Reid is looking to claim his third ATP Challenger doubles title for the year.

Australian duo Dylan Alcott and Heath Davidson have advanced to the quad wheelchair doubles final at the French Riviera Open.

The top seeds scored a 6-3 6-2 win against Brits Andy Lapthorne and Antony Cotterill. They now face Dutch pair Sam Schroder and Niels Vink for the title.

Alcott will also face Schroder in the singles semifinals at the ITF clay-court tournament, a rematch of their recent Roland Garros final.

Aussie duo Destanee Aiava and Olivia Gadecki have won the doubles title at an ITF $25K tournament in Madrid.

The 21-year-old Aiava and 19-year-old Gadecki did not lose a set for the tournament and secured the title with a 6-3 6-3 win against Japan’s Mana Ayukawa and South Korea’s Na-Lae Han in the final.

Gadecki is also enjoying an impressive week in singles, where she is through to the semifinals.