Nick Kyrgios is counting the positives after a big-hearted five-set battle with Dominic Thiem at the Australian Open. 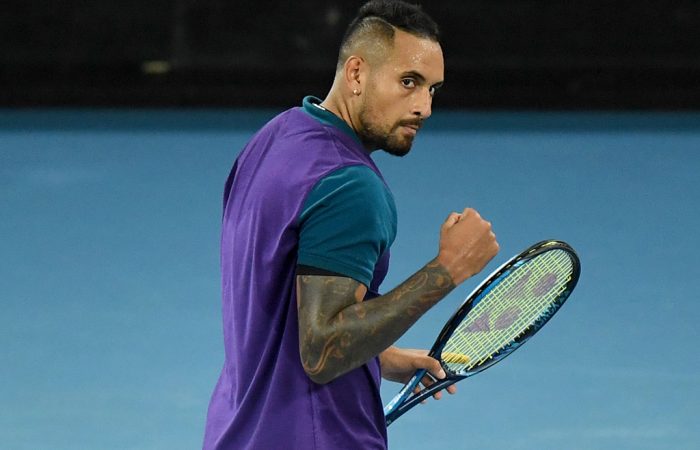 He freely admits it’s a complicated relationship, but Nick Kyrgios reunited with professional tennis this summer as he might an old buddy.

“It doesn’t feel like I’ve been away for a year,” a buoyant Kyrgios told media after pushing world No.3 Dominic Thiem to five sets in a blockbuster Australian Open third round played before a supercharged home crowd at John Cain Arena.

“I embrace it every time I’m out there.”

The ‘picking up where he’d left off’ sentiment was one that Kyrgios expressed several times in a fortnight that included a third-round run at the Murray River Open and three stunning matches at his home Grand Slam.

Lighting up his favourite court with a win over Frederico Ferreira Silva and a pair of match points saved against No. 29 seed Ugo Humbert, Kyrgios was equally thrilling as he pushed Thiem in a scintillating five-setter.

Thriving with the energy created by his many on-site supporters, the 25-year-old was equally embraced via social media.

It was a notably upbeat Kyrgios who talked with the media afterwards.

“The energy out there was special,” said Kyrgios, who led by two sets before Thiem, the recent US Open champion and runner-up at Australia Open 2020, staged one of his most memorable comebacks.

“I’m still proud of myself. You know, I took 13 months away from the game, and to produce that level and go toe to toe with one of the best players in the world, I’m pretty proud. I left it all out there.”

Run to the kitchen and grab the 🍿

Kyrgios will aim to do the same again today as he teams with close friend Thanasi Kokkinakis, who had a front row seat last night, in the Australian Open doubles.

“I’m going to have some fun with Thanasi,” said Kyrgios, who concedes that his longer-term tennis plans are harder to pinpoint.

“I don’t know, man, I can change like the wind,” said the Australian, explaining a reluctance to travel amid the complications created by the pandemic.

When the time comes to return to the tour, Kyrgios will bring a healthy level of perspective.

Asked what he’d learned about during the last difficult year, the 25-year-old was expansive.

“That I have a big heart,” Kyrgios responded. “I was going through a lot during the year, and I was pretty proud (with) the way I prepared.

And despite the final score not quite tipping in his favour, a big-hearted battle with Thiem only added to that confidence.

“I mean, he’s the third-best player in the world for a reason, and I’m right there and I believe in myself,” said Kyrgios.

“I knew that today I had an absolute fighting chance. I walked in that match expecting to win. That’s how I always go into a match.”

And whether it be in his doubles with Kokkinakis or his return to singles competition, the re-energised Australian is determined to maintain that positive outlook.

“I’m gonna come with my head held high tomorrow, play some doubles, see what else, see what tennis I’ll play this year,” he said.