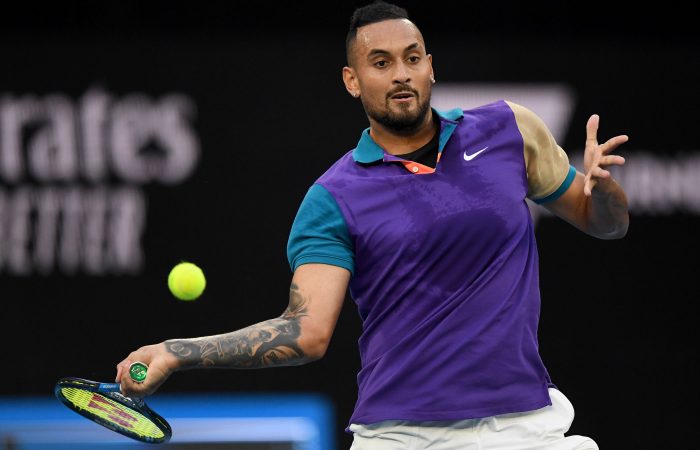 A gallant Nick Kyrgios’ Australian Open 2021 campaign has ended in a five-set loss to world No.3 Dominic Thiem.

Last year’s Australian Open finalist fought back from a two-sets-to-love deficit for the fourth time in his career to post a 4-6 4-6 6-3 6-4 6-4 victory in an incredible third-round clash at John Cain Arena tonight.

“To produce that level and go toe-to-toe with one of the best players in the world, I’m pretty proud,” Kyrgios said. “I left it all out there.”

The world No.47 made a blistering start, breaking Thiem’s serve in the opening game of the match and immediately inciting a vocal crowd.

With underarm serves and tweener attempts in Kyrgios’ first service game, it was clear the Australian was in the mood to put on an entertaining show.

Landing 77 per cent of first serves, and winning 83 per cent of those points, Kyrgios took the opening set.

Kyrgios continued to dominate the US Open 2020 champion, losing only two points on serve in the second set. After breaking in the ninth game, he sealed the set with an underarm service ace.

ALL FIRED UP 😤@NickKyrgios has raced to a two sets to love lead 😱🇦🇺#AusOpen | #AO2021 pic.twitter.com/XZDiii5XeN

Thiem proved why he’s one of the world’s best players, fighting back to break Kyrgios’ serve for the first time early in the third set.

The 27-year-old Austrian lifted his level, hitting 12 winners and committing only a single unforced error to push the match into a fourth set.

“One thing I noticed about him maybe two sets to love down, he was always positive, he didn’t show any negative emotion,” said Kyrgios. “He knew there was along way to go in that match.”

After holding serve in a hard-fought 11-minute opening game of the fourth set, Kyrgios pumped his fist on his heart.

The Australian was showing ample heart in his efforts, refusing to let Thiem wrest control of the match. But that was increasingly proving no easy task.

Thiem won six consecutive service games to love during the third and fourth sets, restricting Kyrgios from building any momentum.

The Austrian struck again late in the fourth set, winning the final three games to level the match at two-sets all.

Kyrgios had a rapturous crowd on the edge of their seats – but with the momentum in his favour, there was no stopping Thiem.

The world No.3 broke in the seventh game of the deciding set and maintained that advantage to close out victory after three hours and 21 minutes on court.

Kyrgios now turns his attention to doubles, where he is teaming with fellow Aussie and close friend Thanasi Kokkinakis. They play their first-round match tomorrow.

“(Then we’ll) see what tennis I’ll play this year. If I can continue to perform like that, I’m sure that the results will follow.”

What a ride it was with @NickKyrgios 👏🙌

We already can't wait to see you back 🇦🇺#AusOpen | #AO2021 pic.twitter.com/ZiPMhPBcjM