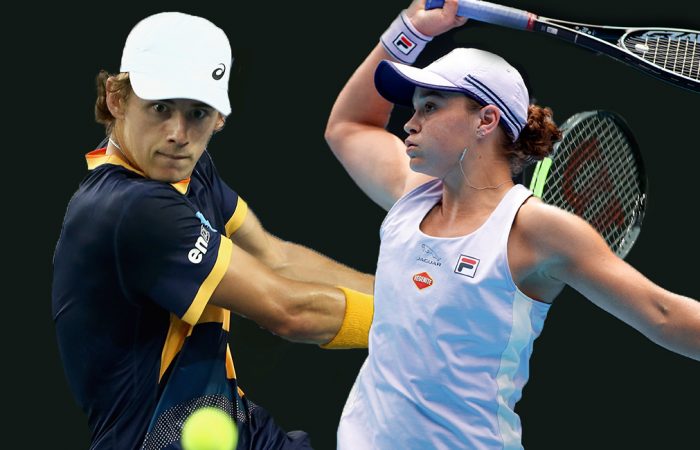 There will be no fans on site at Melbourne Park today due to new stay-at-home orders from the Victorian Government, however our top-ranked Aussies are still well supported.

These two impressive athletes, with exemplary attitudes to match, might be the stars on court – but both appreciate that their individual success would not be possible without their respective teams.

World No.1 Barty is often lauded for her on-court smarts, but is quick to acknowledge the contribution that coach Craig Tyzzer makes in formulating her astute game plans.

“Tyz is extremely diligent with all the work that he does,” Barty says. “He’s the best in the business. I’m very fortunate to have him in my corner.”

De Minaur credits his team, which includes long-time coach Adolfo Gutierrez and Australian Davis Cup captain Lleyton Hewitt, for ensuring he is in the right head space for matches.

“I do have a great team around me that kind of puts things in perspective,” says the world No.23.

The top-ranked Aussies face tests against seeded opponents tonight. Both love rising to a challenge, and with their conscientious approaches, are sure to be ready to continue proudly flying the Aussie flag at this year’s Australian Open.

[1] Ash Barty (AUS) v [29] Ekaterina Alexandrova (RUS)
Women’s singles, third round, Margaret Court Arena, night session, first match (from 7pm AEDT)
Through to the Australian Open third round for a fifth consecutive year, Barty is determined to continue her winning run. The world No.1 faces Alexandrova, who has won seven of her nine matches so far this year. “I’ve never hit with her. That’s a new one for me,” admits Barty. “I think that’s the time for Tyz (coach Craig Tyzzer) and I to sit down and do our homework.” Barty is well aware the 25-year-old Russian looms as a challenge. “She’s obviously playing some very good tennis,” she notes.
Head-to-head record: First career meeting

[21] Alex de Minaur (AUS) v [16] Fabio Fognini (ITA)
Men’s singles, third round, Margaret Court Arena, night session, second match
De Minaur has matched his career-best result at the Australian Open – and now has his sights set on advancing to the fourth round for a first time. Standing in his way is Fognini, a 33-year-old Italian who has previously reached that stage on three occasions. “(He’s) a quality opponent. Fabio has been up there for a very long time,” De Minaur notes of the world No.17. “He’s back to playing his best tennis. He showed it at ATP Cup. It’s going to be a very tough one.”
Head-to-head record: First career meeting

[WC] Andrew Harris (AUS)/Ellen Perez (AUS) v [WC] Luke Saville (AUS)/Asia Muhammad (USA)
Mixed doubles, first round, Court 3, first match (from 11am AEDT)
In this showdown between two wildcards, at least one Aussie is guaranteed to progress to the second round. The 27-year-old Saville is the top-ranked doubles player on court at world No.37, partnering world No.38 Muhammad. Perez, 25, has a doubles ranking of No.48 and Harris, 26, is ranked No.264.

[WC] John-Patrick Smith (AUS)/Astra Sharma (AUS) v Lukasz Kubot (POL)/Iga Swiatek (POL)
Mixed doubles, first round, Court 13, third match (not before 3.30pm)
This is a rematch of last year’s quarterfinal, which the Australian combination won in a match tiebreak. The 19-year-old Swiatek is now a Grand Slam champion, winning Roland Garros later in 2020. Smith and Sharma, who were mixed doubles finalists here in 2019, are chasing their own major title.

[WC] Thanasi Kokkinakis (AUS)/Nick Kyrgios (AUS) v Lloyd Harris (RSA)/Julian Knowle (AUT)
Men’s doubles, first round, Court 3, fourth match
Best friends Kokkinakis and Kyrgios are teaming up at the Australian Open for a third time – and for the first time since 2015. They have a 0-2 win-loss record together at the tournament, will it be third-time lucky in their first-round match today?

Arina Rodionova (AUS)/Storm Sanders (AUS) v [9] Alexa Guarachi (CHI)/Desirae Krawczyk (USA)
Women’s doubles, second round, Court 7, fourth match
Rodionova, 31, and Sanders, 26, are the last Aussie hopes in the women’s doubles draw. They face the No.9 seeds, who were Roland Garros finalists last year. Sanders is aiming to reach the Australian Open third round for a first time, while Rodionova is looking to do so for a second time.