Sam Stosur is reuniting with China's Zhang Shuai at Australian Open 2021, a tournament they won together two years ago. 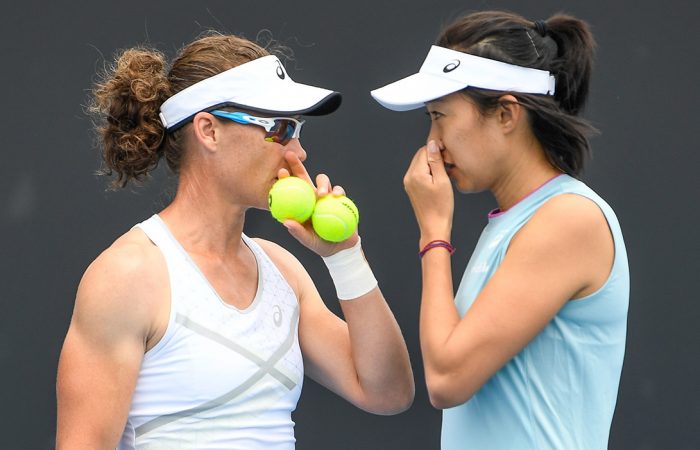 The last time Sam Stosur teamed with China’s Zhang Shuai at the Australian Open, they swept through the women’s doubles draw to win the title. Their stunning 2019 run included wins over the top two seeds.

Reuniting this season, Stosur is excited to be back on court with her good friend.

“I’m really looking forward to getting back on court with Shuai. Hopefully we can pick up where we left off,” Stosur told tennis.com.au. “She’s always fun to be around and always has a positive outlook.”

Their Australian Open victory was the beginning of a stellar 2019 season for the duo, who also reached the Miami final, the semifinals at the WTA Finals and Roland Garros quarterfinals.

“If we can regain that form, that will be very exciting,” said Stosur, a former world No.1 doubles player who is currently ranked No.33.

They are one of 11 teams featuring Aussie players in this year’s Australian Open women’s doubles draw.

Ash Barty, Australia’s top-ranked doubles player at world No.14, is playing alongside American Jennifer Brady. They face Australian wildcards Abbie Myers and Ivana Popovic in the first round.

The new partners, who made the Yarra Valley Classic quarterfinals in their first tournament together last week, have quickly bonded over an iconic Australian food.

“I actually organised a jar of Bartymite for Jen, so she loved that. She’s a converted Vegemite fan, which is always good,” Barty said. “Now just got to get her to try it with avocado on toast and she’ll be fine.”

Destanee Aiava and Astra Sharma will face top seeds Su-wei Hsieh and Barbora Strycova in the opening round, while Kimberly Birrell and Jaimee Fourlis have drawn US Open 2020 champions Laura Siegemund and Vera Zvonareva.