Lessons from the pros: Shining examples from 2020

With their performances and attitudes over the past year, Australia's top-ranked players set powerful examples that players of all levels and ages can learn from. 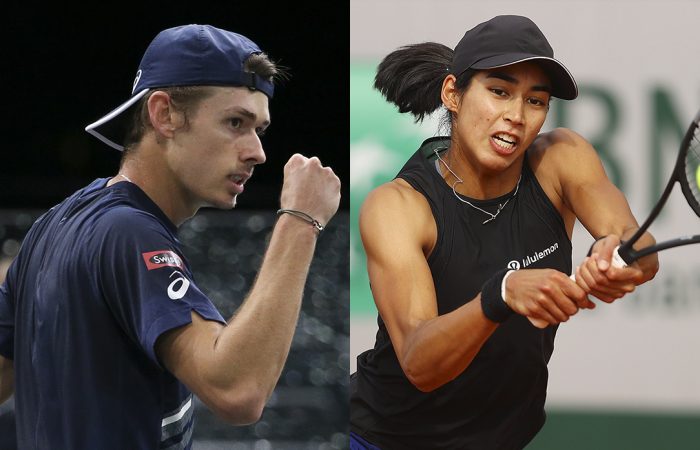 As Australia’s best players entertain and impress us with their skills on court, they also serve up an array of valuable lessons.

Tennis players of all ages and ability can learn from such lessons, as these outstanding 2020 examples highlight …

Alex de Minaur posted a career-best result at the US Open in September, advancing to his first Grand Slam quarterfinal.

After a loss to eventual champion Dominic Thiem, the 21-year-old demonstrated his determination to build on this outstanding result.

“I want to keep on pushing. I’ll strive for bigger and better things. I just got to keep improving.

“Hopefully with years to come I’ll get bigger, I’ll get stronger, I’ll grow into my body a little bit more, then it will just be another level. Still, I don’t want to wait a couple of years. I want to be making strides as soon as I can. I’ll put in all the work I can to keep putting myself in these positions.”

It is an exemplary attitude that helped De Minaur finish as Australia’s top-ranked man for a third consecutive year and demonstrates that even the world’s best never stop trying to improve.

Returning from injury is often daunting, as it takes time to restore confidence in your body.

Daria Gavrilova experienced this in her comeback from a 12-month injury lay-off for foot and Achilles complaints.

The 26-year-old admitted she had reservations at Roland Garros, which was only the second tournament in her return.

“I had my chances, but I lost focus,” conceded Gavrilova following a three-set loss to former Wimbledon finalist Eugenie Bouchard in the second round.

“(I) didn’t play as tough and my intensity went away. That’s where I gave her a second chance and she took it.

“Physically I had doubts. I was like ‘can I do it? I haven’t played for a year’. It played on my mind, but in the end I was fine.”

As well as highlighting the value in match play, Gavrilova’s example also demonstrates the importance of self-belief in your body.

"Rallying" took on a whole new meaning as Aussies including @NickKyrgios and @AshBarty used their time off tour to support others in the community throughout 2020. 👉 https://t.co/U72pssZxGN pic.twitter.com/ol25iyZmSb

When John Millman claimed his first ATP title in November, he paid tribute to the role of his extended support network.

“I am so happy. It has been a big team effort,” said the 31-year-old from Brisbane.

“To all the team that is littered around the world, family, friends – thank you for always supporting me. Not just in the good times, but the tough times. This is really special.”

Millman’s title breakthrough was a welcome reward for perseverance, having overcome multiple injury setbacks throughout his career.

“It is incredible. I am so happy and relieved,” Millman said after winning Nur-Sultan, where he saved match points in the quarterfinals.

“It is something that I have built my brand on, I guess. It is the one thing I can control – to never say die and never quit the fight.”

Similarly, Millman was quick to credit the support of his team-mates when he sealed Australia’s Davis Cup qualifying victory against Brazil earlier in the year.

“They dragged me up when I was nearly down,” Millman said after winning two steely three-set battles during the tie.

Millman’s gratitude is important in a sport where even stunning individual highs are not possible without the support of others.

Losses can prove the perfect chance to learn, especially when they are against more experienced or higher-ranked opponents.

Astra Sharma noted this after posting a career-best result at Roland Garros in 2020, where she was a lucky loser in the main draw. The 25-year-old from Perth made the most of the opportunity, scoring her best Grand Slam win with a first-round victory over world No.58 Anna Blinkova.

“(I’m) really grateful for the opportunities. Loads of lessons,” Sharma said after exiting to No.27 seed Ekaterina Alexandrova in the second round.

“Five matches at that sort of level, I mean, that’s incredible to take away for learning. I think whenever you play matches at this level, you’re exposed quite a bit on what you need to work on.”

Sharma, who was ranked No.134 at the time, vowed to use her loss to Alexandrova as motivation to return stronger.

“There’s a lot of specific things I need to work on to get better and push these girls at a higher level,” she said.

From top-100 breakthroughs to impressive ranking improvements, many of our top-ranked Aussies celebrated new highs in 2020 #GoAussies https://t.co/aqZFOE7BKU

Don’t forget, the court is calling. Join in the fun, hire a court today and take advantage of the many healthy benefits of tennis.