Australia is through to the 2020 Davis Cup by Rakuten Madrid Finals after recording a 3-1 victory against Brazil in a qualifying tie in Adelaide. 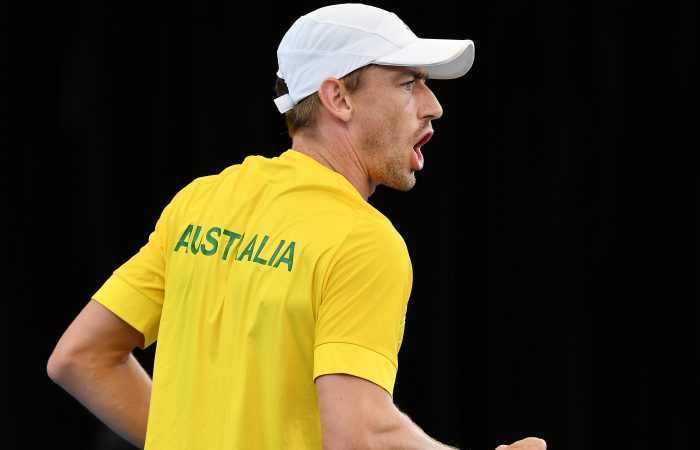 For the second time in as many days, John Millman has staged a remarkable comeback to claim a Davis Cup victory for Australia.

Today’s 6-7(6) 7-6(3) 7-6(3) win over world No.82 Thiago Monteiro in Adelaide was extra sweet – cementing Australia’s 3-1 victory against Brazil and guaranteeing the nation’s place at the 2020 Davis Cup by Rakuten Madrid Finals in November.

Millman’s three hour, five minute victory was a physical encounter – as Millman demonstrated when he saved one break point late in the opening set in a gruelling 39-shot rally.

The No.43-ranked Millman had his chances early in the match, but struggled to convert the break point opportunities he had earned. The left-handed Monteiro was dictating play with his forehand, moving Millman around the court and forcing him deep behind the baseline.

Yet Millman kept fighting, refusing to let Monteiro overwhelm him.

Neither player won consecutive games throughout the match and when it came down to a deciding tiebreak in the final set, it was Millman who lifted under pressure.

What it’s all about 🇦🇺 👏

Australia has qualified for the @DavisCupFinals with a spirited 3-1 victory against Brazil. #Adelaide, that was one epic #DavisCup encounter! #GoAussies pic.twitter.com/mg5FWFS3Po

An emotional Millman paid credit to the crowd and his Australian team-mates for their support.

“The body was a little sore. The emotion levels were perhaps a little bit down at times – it’s tough to be up the whole time. But that is when you have really got to use your bench and use the experience that is Lleyton Hewitt and Tony Roche … they dragged me up when I was nearly down.”

It was a dogged effort that left Australian captain Lleyton Hewitt bursting with pride.

“What a performance,” Hewitt beamed. “That’s what Davis Cup tennis is all about.”

“That is going to go down as one of the great weekends in his career.”