John Millman achieves a long-awaited career milestone after defeating Adrian Mannarino to win a first ATP title at the Astana Open in Kazakhstan. 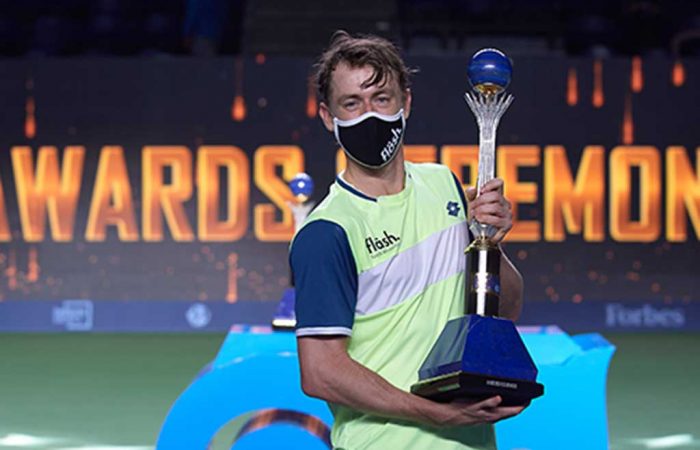 Despite its many challenges, John Millman will count the 2020 season as one of his best, after claiming a first ATP-level title in Kazakhstan.

The 31-year-old Australian overcame Frenchman Adrian Mannarino 7-5 6-1 in an hour and 48 minutes to lift the trophy at the Astana Open in Nur-Sultan.

“It is incredible. I am so happy and relieved. I just feel very satisfied. It is just a pure moment of satisfaction … That was my third final, third time lucky I guess,” said Millman, who was runner-up at Budapest in 2018 and Tokyo last season

“These things aren’t easy to win and to do so at a place where I felt so comfortable all week, in terms of the hospitality, makes it really special.

“To win the inaugural Astana Open is special. I am so happy. It has been a big team effort and I am pumped.”

After saving a pair of match points in a quarterfinal win over Tommy Paul and outlasting Frances Tiafoe in a three-set semifinal, Millman was able to produce his best tennis in the most important moments of the final.

He saved five break points in the opening set and broke serve in the final game to take the opener in just over an hour.

His French opponent held serve just once more, Millman taking control with a break of serve in an extended fourth game, then soon holding a  5-1 advantage.

Millman saved another breakpoint as he served for the title, before claiming victory on his first match point. He has now won all three matches he’s contested against the 39th-ranked Mannarino.

“When I was facing those match points in the quarterfinals, I wouldn’t have thought that a couple of days later I would be lifting the trophy,” Millman related to atptour.com.

“It is something that I have built my brand on, I guess. It is the one thing I can control – to never say die and never quit the fight.”

Earning USD $13,410 with his first singles title, Millman is also set to re-enter the world’s top 40 after collecting 250 ranking points with victory. Equally significantly, he achieved a major 2020 objective.

“I have obviously won lots of Challengers and I have done well in Tour events and at Grand Slams, but it is a whole other thing to make that breakthrough and to win an ATP Tour title,” he commented.

“That was definitely one of the goals, so it is very satisfying to get to that goal.”

MiIllman now moves onto the Paris ATP Masters 1000 event, where he’ll face Serbia’s Miomir Kecmanovic, the world No.40, in the first round.

Preparing for his ninth tournament contested since returning from the tour shutdown, Millman is understandably buoyed by his title breakthrough. “It has been a really long trip and it is nice to get the reward after enduring a battle like that,” he related.

“I have always looked to improve. You have to at this level. You can’t stand still,” said Millman.

“There are so many very talented players knocking on the door and you have got to continue to improve and continually get better.”

Australians Max Purcell and Luke Saville were runners-up in the men’s double event at Astana, Sander Gille and Joran Vliegen claiming a 7-5 6-3 victory in the final.

It was a first ATP doubles title this year for the top-seeded Belgians, who claimed victory in 78 minutes.

Purcell and Saville, also men’s doubles finalists at Australian Open 2020, remain in contention to qualify for the ATP Finals, which begin in London on 15 November.