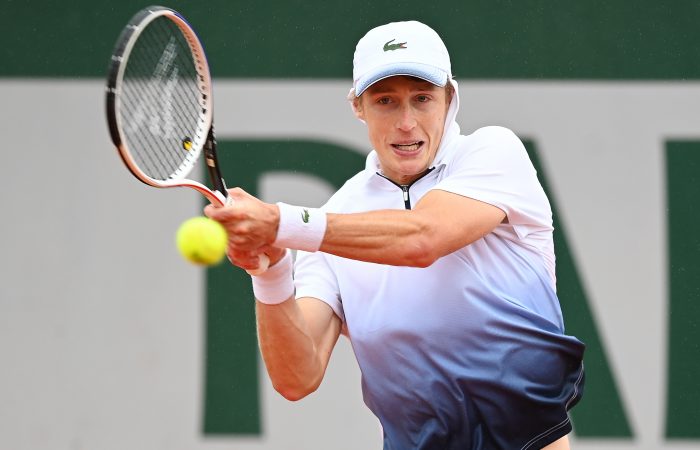 The No.122-ranked Polmans is certainly proving that in a breakout 2020 season.

The 23-year-old from Melbourne enjoyed early success on tour in doubles, reaching the Australian Open semifinals on debut in 2017 and peaking at No.68 in the rankings that year.

Singles success remained his goal though and he has toiled on the secondary tours in recent years to improve his game. He lost in Grand Slam qualifying 11 times before making his major main draw debut at Australian Open 2019.

Quietly building confidence through hard work and experience, Polmans recorded his first Grand Slam win at the Australian Open earlier this year. A five-set victory against world No.68 Mikhail Kukushkin was the biggest win of his career and helped his singles ranking rise to a career-high of No.119 in March.

Polmans continued to train hard in Melbourne during the recent tour shutdown, where he spoke to tennis.com.au about his growing self-belief.

“I think belief is a pretty big part of tennis,” he said.

“Thankfully, I’ve had some matches now against top 100 guys and I’m starting to feel like my game can match with them. Slowly I’m making those jumps mentally.”

Polmans proved that in Paris, upsetting world No.38 Ugo Humbert in his main draw debut. Even when the Frenchman lifted his game late in their four-set match, the Australian’s focus and belief was resolute.

The first top-50 win of Polmans’ career sets up a second-round clash with world No.19 Cristian Garin. It is another chance for the Australian to demonstrate how much he has improved.

“It’s been a different year for sure, but I’m happy with the results,” Polmans said. “The hard work’s paid off.

“It’s going to be an awesome match against a top-20 player, my first time playing against someone like that.”

[LL] Marc Polmans (AUS) v [20] Cristian Garin (CHI)
Men’s singles, second round, Court 9, first match (7pm AEST start)
Facing a top 20-ranked opponent for the first time in his career, the No.122-ranked Polmans is looking to continue his giant-killing run. The 24-year-old Garin won the Roland Garros boys’ singles title in 2013 and is enjoying a career-best year, making his top 20 debut in February after winning back-to-back ATP titles on clay. Like Polmans, he is also aiming to advance to a Grand Slam third round for the first time. This is their first career meeting.

Astra Sharma (AUS)/Maria Sanchez (USA) v [1] Su-Wei Hsieh (TPE)/Barbora Strycova (CZE)
Women’s doubles, first round, Court 3, first match (7pm AEST start)
After her second-round singles exit, Sharma returns to court in doubles with her 30-year-old American partner to face the world’s top team. World No.1-ranked Hsieh and No.2-ranked Strycova have won five titles this year and built a 21-1 win-loss record. Their only loss was in the Australian Open final and they won the Rome title earlier this month without dropping a set. The 25-year-old Sharma is looking for her first Roland Garros doubles win.

[11] John Peers (AUS)/Michael Venus (NZL) v Miomir Kecmanovic (SRB)/Casper Ruud (NOR)
Men’s doubles, first round, Court 2, second match
After winning their second title of the season in Hamburg last week, Peers and Venus enter this tournament with a 7-1 win-loss record on clay and as one of the most in-form teams. The 32-year-old Peers is making his eighth consecutive doubles appearance at Roland Garros, where his best result is a quarterfinal run in 2018. Venus, also 32, won the French Open doubles title in 2017. Their opponents are 21-year-olds who thrive on clay, but have enjoyed most of their tour success in singles.

Ellen Perez (AUS)/Storm Sanders (AUS) v [14] Alexa Guarachi (CHI)/Desiree Krawcyzk (USA)
Women’s doubles, first round, Court 3, fourth match
This is a rematch of the Istanbul final last month, which marked a best WTA result for Perez and Sanders as a team. The left-handed Aussies lost that final in straight sets. Can they bounce back stronger? The 26-year-old Sanders and 24-year-old Perez are certainly hoping so as they make their Roland Garros doubles debut. With a season record of nine wins from 17 matches at tour level, they have proved they can challenge the world’s best teams.