Verging on a top 100 breakthrough in singles, Marc Polmans is looking forward to the return of professional tennis to continue chasing his goals. 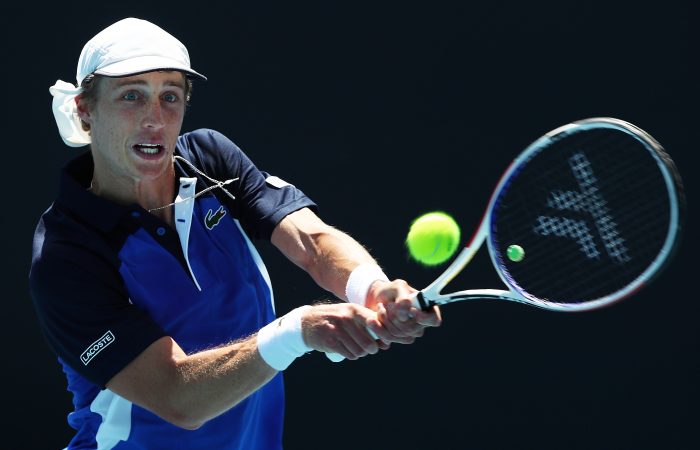 Marc Polmans was at a career-high ranking of No.119 when COVID-19 led to a suspension of the ATP Tour.

The 23-year-old from Melbourne was closing in a life-long dream of breaking into the world’s top 100 in singles and felt ready for a big 2020 season.

“I made the best start to the season I possibly could have, so I was really looking forward to the rest of the year,” Polmans told tennis.com.au from his parent’s home in Melbourne, where he is currently isolating.

“Most of my points I need to defend are at the back half of the year, so it’s a bit disappointing that the season got cut short or might be cancelled for good. But, top 100 is still one of my biggest goals I’m hoping to achieve soon.”

A first Grand Slam singles main draw win in January had boosted Polmans’ confidence, proving to the South African-born player he belonged among the sport’s elite.

“I was really happy I was able to get over the line in front of my friends and family at my home Slam,” said Polmans, who received a wildcard into the draw. “It was special and helps take me one step closer to that top 100.”

As he targets that ranking breakthrough, Polmans knows self-belief is important.

“A lot of the top 100 and ATP-level players they have a big team around them, they are super professional and don’t leave many things to chance. I feel like they believe that they belong there – and I think belief is a pretty big part of tennis,” he noted.

“A lot of Challengers players probably don’t believe they can consistently play at the next level. Thankfully, I’ve had some matches now against top 100 guys and I’m starting to feel like my game can match with them. Slowly I’m making those jumps mentally.”

READ: A time to focus on off-court development

Polmans demonstrated that at Australian Open 2020, where he overcame world No.68 Mikhail Kukushkin in a five-set opening round.

He found himself in a similar situation again in January, with Kukushkin bouncing back after losing the opening two sets to force the match into a deciding set.

“A few demons were coming back to me, I was up two-sets-to-love last year as well and lost in five, so it would have been pretty rough to lose again,” Polmans admitted.

“(Last year) I felt like the guy raised his game and I didn’t feel like I raised my game well enough to stay with him. This year I was down a break in the fifth and I felt like he was starting to raise his game and figure out what I was doing, so I tried to step up my game and play more aggressive.”

Polmans clinched the deciding set 6-4 in a four-hour, 17-minute battle against Kukushkin. It was his third career top-100 victory and first at Grand Slam level.

“That was awesome, especially to win in five sets,” Polmans said.

Melbourne Park has been the scene of many career highlights for Polmans, who has trained at the venue since he was 12. He won the Australian Open boys’ doubles title in 2015 and made the Australian Open men’s doubles semifinals as a wildcard pairing with Andrew Whittington in 2017.

“I’ve always played well there for some reason,” he said of Melbourne Park. “Hopefully that can keep going.”

Peaking at a career-high doubles ranking of No.68 in 2017, Polmans’ early doubles success has helped his net-rushing singles game too.

“I’m constantly trying to take time away from my opponent, so the best way to do that is to come forward. Doubles has helped a fair bit,” he admitted.

Improving his serve is another 2020 goal.

READ: A silver lining to isolation?

Borrowing equipment from Tennis Australia, Polmans has also been able to set-up a home gym to help maintain his fitness levels while in isolation.

He is also embracing reading during this extended time off tour.

“I do quite like reading about other athletes and their experiences. I feel like that can help with my tennis. I’m always trying to work on the mental side,” he said.

Listing Rafael Nadal’s autobiography as one of his favourite books, Polmans is also enjoying the work of leading athlete mindset author Allistair McCaw.

“I want to read the Kobe Bryant autobiography too. I haven’t got my hands on it yet, but I’ve heard good things about it, so I’m looking forward to reading that one,” Polmans said.

As the determined Polmans continues to chase his tennis dreams, such added inspiration can only help.