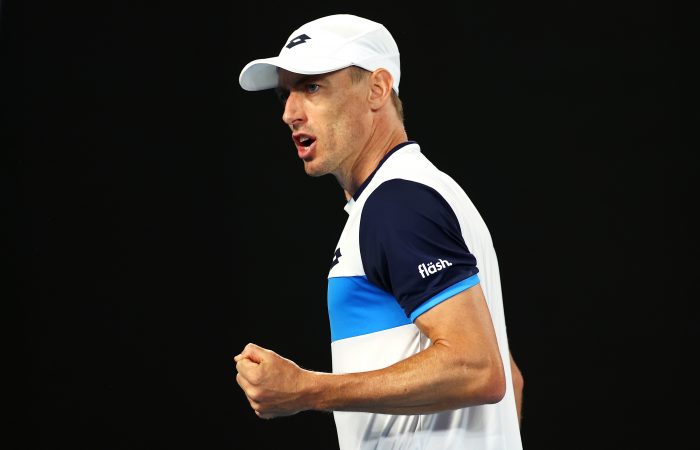 John Millman has scored a hard-fought victory in his first professional match in more than five months.

Millman showed nerves of steel late in the match against the world No.38, saving three break points on serve in the ninth game and another in the 11th.

The No.43-ranked Millman, who had not played since spearheading Australia to a Davis Cup qualifying round win against Brazil in Adelaide in March, built an early advantage in the deciding tiebreak. Racing to a 6-2 lead, he secured victory on his first match point in the two-hour, 46-minute battle.

Millman faces world No.21 and big-serving American John Isner in the second round.

In other results today, Alex de Minaur progressed to the second round in men’s doubles. The 21-year-old Aussie teamed with Spaniard Pablo Carreno Busta to upset fourth seeds Ivan Dodig of Croatia and Slovakian Filip Polasek 3-6 7-6(3) [10-5]. Isner and his Polish partner Hubert Hurkacz await in the next round.

Ajla Tomljanovic withdrew from her first round doubles match with a right thigh injury. It leaves Storm Sanders and Ellen Perez as the last remaining Australians in the women’s doubles draw.